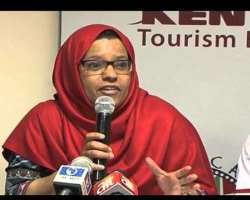 Bitter truth: The Kenyan woman pictured above sarcastically talked about how the Presidency flew in 7 Private Jets to their Independence celebration recently

When it was revealed that Nigeria's Presidential Air Fleet had 10 aircrafts, with another on the way to make it 11, many of you thought it was ridiculous. Even more, the sum of 1.5billion naira earmarked for PAF in the 2014 budget caused more outcry from the public, but now, the international community is starting to take note of, and even mock our governments profligacy.

In a new video that has just surfaced online, Kenyans have ridiculed President Goodluck Ebele Jonathan over the Presidential fleet when he visited Kenya during their just concluded Independence Day celebration.

In the video, a woman, yet to be identified is seen sarcastically commenting on the 7 planes flown in by the Nigerian delegation during the visit.

Isn't it preposterous that the average citizen lives below a dollar a day, yet the Presidency operates 10, soon to be 11 private jets??? Seriously shaking my head for the leaders of this 'once great country."