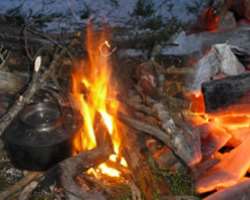 
Utterly oblivious of the deleterious effects on their health, and the environment at large, many households in Nigeria have persistently kept faith with the use of biomass fuel as their preferred choice of cooking fuel. In many communities, it is the only type of cooking fuel they know, the practice having been handed down from generation to generation. Even those who are fully aware of the health implications of using charcoal and firewood-powered stoves for their cooking are constrained to continue with solid fuel use because of their poor economic conditions, which make it difficult for them to change.

The continued use of wood, charcoal, animal dung and crop residues, among other forms of biomass fuel, for cooking, results in heavy emission of dangerous gases which constitute a major source of household air pollution. According to the 2003 edition of Public Health magazine, a publication of the University of California, Berkeley, United States, 'In homes without ventilation, exposure to particulate matter (soot), along with carbon monoxide, formaldehyde, benzene, nitrogen dioxide and other gases can reach … more than 20 times higher than standards set by the United States Environmental Protection Agency.'

This unhealthy practice is however not limited to Nigeria; it is common among poor Third World countries whose citizens see each passing day as a battle for existence. In the poor temperate and cold regions of the world, open fire is a major source of heating the home, which is also very dangerous. For instance, the World Health Organisation estimates that, globally, HAP is accountable for more than 1.6 million deaths annually, while approximately 2.4 billion people - or two-thirds of the developing world - rely on biomass-fuelled fire for their cooking. A recently released Global Burden of Disease 2010 report, funded by the Gates Foundation, and published in The Lancet, the world's leading medical journal, however, estimates that about 4 million deaths occur each year from illness attributable to household cooking smoke.

Although it does not kill directly, HAP exposes otherwise healthy people to such illnesses as acute lower respiratory infection, chronic obstructive pulmonary disease and pulmonary tuberculosis. There is also mounting evidence that tend to link exposure to HAP with illnesses such as lung cancer, cataracts and asthma. Children, studies have proved, are two or three times more susceptible to the diseases mentioned because they absorb pollutants more readily and retain them much longer in their system than adults do. HAP is said to be the fourth leading cause of premature deaths in the developing world.

Here in Nigeria, about 120 million people, mostly women, whose traditional duties include household cooking, and children, who naturally keep them company, are at risk. A Federal Ministry of Environment official, Bahijjahtu Abubakar, was recently quoted as saying, 'The WHO says that over 98,000 Nigerian women die annually from use of firewood. If a woman cooks breakfast, lunch and dinner, it is equivalent to smoking between three and 20 packets of cigarettes a day.' This calls for urgent action by the country's health authorities.

Unfortunately, the effects of the dangerous gas emissions are not only limited to the human health challenges they pose; they impact negatively on the environment as well. It goes without saying that the process of gathering biomass fuel involves the cutting down of trees and vegetation cover of an area without a corresponding replanting, leading to deforestation. Nigeria is said to have the highest rate of deforestation in the world, according to figures from the UN Food and Agriculture Organisation. Not to mention the resultant effects of soil erosion, desertification and loss of biodiversity ecosystem.

Besides, household combustion produces pollutants that contribute to climate change. Black carbon, one of the pollutants, is made up of small soot particles, which trap radiation or heat from the sun thus resulting in the warming of the planet surface, and the melting of the glaciers. It is estimated that about a third of global human-caused black carbon emissions come from household heating and cooking with biomass fuel.

Poverty and ignorance are easily identifiable among reasons for the continued reliance on this primitive and deadly form of cooking fuel. It is within the power of the Nigerian government to reduce the level of poverty in the country, currently put at close to 70 per cent, and embark on an enlightenment programme to encourage the adoption of cleaner energy for cooking. As a country with gas reserves said to be three times more than the oil reserves, the government can come up with a policy that will make gas cheaper and available as the preferred cooking fuel.

Unfortunately, the Managing Director/Chief Executive Officer of the Nigeria Liquefied Natural Gas Limited, Babs Omotowa, says LNG constitutes only five per cent of cooking fuel in Nigeria. This is not good enough. According to a non-governmental organisation, the International Centre for Energy and Environmental Development, while China has connected more than 500 million people to electricity, 'more Nigerians are climbing down the energy ladder, moving from electricity, gas and kerosene to fuel-wood and other traditional biomass energy forms.'

Although Abubakar says efforts are on to enlighten Nigerian women about the dangers of reliance on biomass fuel and to introduce special and affordable stoves that will help cut down on the level of pollution, the impact does not seem to be felt in many parts of the country. The belief that a shift from the use of firewood to kerosene is a major achievement is also shortsighted, as it is believed that burning kerosene indoors might cause lung infection, tuberculosis, asthma and cancer.

The ultimate target should be to get Nigerians to make use of the abundant gas that is currently being flared with negative environmental consequences in the country. Ironically, many residents of our thickly populated cities such as Lagos, Ibadan, Kano and others are as deeply involved in the use of biomass fuel as those in the rural areas. No responsible government should fold its arms and allow its citizens to be condemned to avoidable premature deaths as it is currently happening in Nigeria. This is why the government should become more actively involved in getting Nigerians to change from the use of biomass fuel to a cleaner source of energy - for the safety of the citizens and our environment.