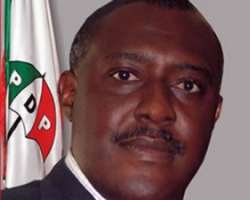 
The National Working Committee of the Peoples Democratic Party (PDP) has advised aides of its elected officials to cease from making hasty statements that could misrepresent their superiors.

The National Publicity Secretary of PDP, Mr. Olisa Metuh, stated this in a statement on Monday in Abuja.

Metuh said this was in reaction to statements credited to Governor Martins Elechi of Ebonyi on the proposed national conference by one of his aides.

According to the party's spokesperson, the purported statement portrayed the governor in bad image.

He added that the PDP as an organised democratic institution had duly established a channel of external communication.

This, he said, was carried out with the utmost sense of responsibility after due clarifications on issues.

'It is therefore wrong and completely unacceptable for anybody to present statements made by individuals who are not members of the NWC as the official position of the party.

'Moreso, such statements were made without due clarifications from the governor,' Metuh said.

He urged such aides to henceforth guard their actions and utterances and to ensure that they did not in any way undermine the unity and stability of the party.

'In the same vein, all unauthorized persons must also desist from making statements in manners that suggest such to be the official position of the NWC on party issues,' Metuh said.

He stressed that the PDP NWC had never in any manner made or authorized any comment on the report.

He pledged the commitment of the PDP NWC to all the party's elected officials, especially its governors whom he said remained its strong pillars.

Metuh particularly restated the NWC's respect for Governor Elechi whom he noted was one of the best governors in the country.

He said that Elechi was one of the leading lights behind the stability and growth of not only the PDP as a party, but the institution of democracy in Nigeria.