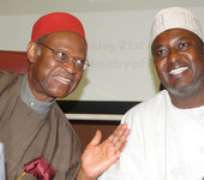 
The Kaduna State Government plans to spend N1 billion to sponsor science students from the state for further studies abroad in 2014, Governor Mukhtar Yero, has said.

Yero, represented by the Commissioner for Education, Ibrahim Ali disclosed this on Monday in Kaduna during the disbursement of scholarship to 12 students from northern states by a US based organisation, Zumunta Association Inc.

Though he did not disclosed the details, the governor said it was in line with the administration’s commitment to education.

According to him, the state government has spent N310 million as scholarship grant to 26,500 students this year and paid N89 million to the National Examination Council (NECO) as examination fees for its students.

He reiterated the commitment of the administration in improving access to quality education in the state, which he said was the key to achieving meaningful development.

The governor advised the beneficiaries to make judicious use of the money, so as to encourage other organisations to invest in the education sector.

Also speaking, the Chairman of the National Scholarship Programme of the association, Prof. Martins Shinkut, a lecturer of Computer Science at the Lincoln University, Missouri, said the scholarship scheme was initiated in 1995.

Shinkut said the effort was aimed at providing educational opportunities to qualified northerners to the study science courses.

He added that the gesture was also to assist parents and guardians with funds to reduce the financial burdens of educating their children.

The University don said over 360 students had benefited from the scheme since its introduction in 1995, adding that each of the beneficiaries would receive N50,000.

Responding on behalf of the benficiaries, Miss Josephine Abarshi, from Niger State, studying at Ahmadu Bello University, Zaria, commended the association, saying the support would aid her to concentrate fully in her academic work.