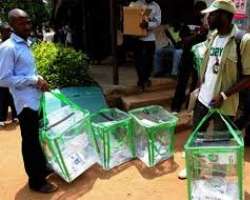 
The Chairman of the Yobe State Independent Electoral Commission (YOSIEC), Mohammed Jauro Abdu, has said that the commission is adequately prepared to hold  local government elections in the state on Saturday (today).

According to the YOSIEC boss,  all the sensitive and non-sensitive materials have already been dispatched to all local government headquarters for distribution to polling units in the areas.

Abdu spoke  in an interview with Channels Television in Damaturu, the Yobe state capital, on Friday.

The chairman said four wheel drive vehicles have been provided to electoral officers to reach areas with difficult terrain assuring that the exercise will be a success.

He stressed that the commission is ready for a hitch free election and called on people of the state to come out en mass to vote for candidates of their choice and to cooperate with electoral officers and security men to ensure a successful exercise.

The 3 Division of the Nigerian Army had in a statement signed by its spokesman, Capt. Eli Lazarus had announced restriction of movement of vehicles and persons during the election.

The restriction, according to the statement, is between 8AM to 3PM, pointing out that only essential services will be allowed in the discharge of their duties.

While wishing the people of the state a peaceful election and a prosperous new year, the statement enjoined the electorate to cooperate with security agencies and avoid any act capable of breaching the public peace during and after the election.

The coalition of political parties in Yobe state had few weeks back passed a vote of confidence on the YOSIEC ahead of the election as the People's Democratic Party (PDP) in the state backed out of the election claiming that it is ill timed because of the current security situation in the state.