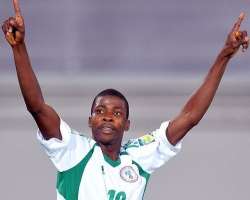 Despite being released from the home based Super Eagles camp to sign for Manchester City in England, it has been revealed to us that Kelechi Iheanacho is yet to sign with the former English champions.

Kennedy Ezenwere, Kelechi Iheanacho's mentor and coach at the Taye Academy he played for in Owerri, Imo state, revealed that Kelechi is presently in Lagos, and has decided to move to FC Porto in Portugal, rather than Manchester City.

“Kelechi has not signed for City; he's presently in Lagos and has now changed his mind saying he wants to move to FC Porto instead”
“I really don't know the terms of the agreement but I wish him well because his father says he wants him to go to Manchester City but Kelechi is saying that city is too big for him” he told brilafm

Iheanacho was voted as the MVP at the 2013 FIFA U17 World Cup in the United Arab Emirates where he helped Nigeria to clinch her fourth U17 title.