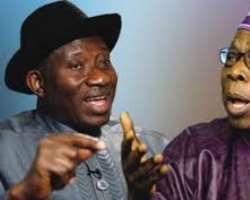 
President Goodluck has taken unprecedented step to clear himself of criminal allegations by former President Olusegun by asking the National Human Rights Commission (NHRC)  to probe allegations against him by Obasanjo in his letter to president.

The president has directed the National Human Rights Commission (NHRC) to investigate the said rights abuses.

Acting on the instruction of the president, the Attorney-General of the Federation (AGF) and Minister of Justice, Mohammed Bello Adoke, forwarded Chief Obasanjo's letter to the commission for investigation into the alleged rights violations contained in the letter.

The AGF, in a memo dated December 23 and addressed to the Executive Secretary of the NHRC, Professor Bem Angwe, requested the commission to investigate the allegations bordering on human rights violations contained on page 9-10 of the letter.

President Goodluck Jonathan, who denied the allegations in his response, is specifically inviting the rights commission to unravel the truth in the allegation that his government had begun training over 1,000 snipers to terminate his political opponents.

In the memo with reference number HAGF/NHRC2013/Vol2/5, Adoke said,  'May I draw your attention to the above and the attached State House Memorandum dated December 23, 2013 in respect of the above subject matter.

'I am to request you to investigate the allegations bordering on human rights violations contained on pages 9-10 of the letter dated December 2, 2013, written by former President Olusegun Obasanjo, GCFR, to President Goodluck Ebele Jonathan, GCFR, attached to the memorandum under reference.

'In order to properly delineate the issues within your sphere of competence particularly as other issues raised in the letter are being investigated by the appropriate agencies of government, I have decided to reproduce the relevant paragraphs below:

'Allegations of keeping over 1,000 people on a political watch list rather than criminal or security watch list and training snipers and other armed personnel secretly and clandestinely acquiring weapons to match for purposes like Abacha and training them where Abacha trained his own killers, if it is true, it cannot augur well for the initiator, the government and people of Nigeria. 'Here again, there is a lesson of his to learn from anybody who cares to learn from history. Mr. President would always remember that he was elected to maintain security for all Nigerians and for personal or political ambition or interest of anyone.

'The Yoruba race adage says 'the man with whose head coconut is broken may not live to savour the taste of the succulent fruit.' Those who advise you to go hard on those who oppose you are your worst enemies.

'Democratic politics admits and is permissible of supporters and opponents. When the consequences come, those who have wrongly advised you will not be there to help carry the can. Egypt must teach some lessons.

'Presidential assistance for a murderer to evade justice and a presidential delegation to welcome him home can only be in bad taste generally but particularly to the family of the victim. Assisting criminals to evade justice cannot be part of the job of the presidency.

'Or, as it is viewed in some quarters, is he being recruited to do for you what he had done for Abacha in the past? Hopefully, he should have learnt his lesson. Let us continue to watch'.'