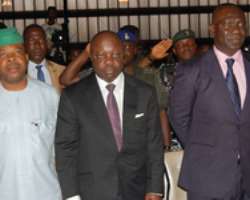 
Governor Emmanuel Uduaghan of Delta State has called on permanent secretaries in the state to be committed to their duties, ensure transparency and have fear of God in the course of service.

Uduaghan gave the advice while swearing-in 25 new permanent secretaries on Monday in Asaba.

He said the appointments were necessitated by available vacancies in the state's civil service, adding that the selection was based on merit.

Uduaghan said that the position of permanent secretary was a career and political one, adding that it was meant for civil servants who distinguished themselves in service.

He said some of them, especially those in the education sector, would be deployed to zones, to help government achieve success in its educational policies.

'We have many permanent secretaries retiring from service, but we take our time in appointing new ones because the position is not a retirement gift.

'We have given out these appointments to enable us to achieve our agenda of 'Delta Beyond Oil'. In doing this, we need a strong civil service like what exists in Singapore.

'It's only a strong civil service that has the power to build a state without oil.'

Uduaghan appealed to the appointees and commissioners in the state to ensure peace in their various ministries, and work in harmony in the interest of the state.

The governor congratulated the appointees, including Mrs Edit Okowa, wife to Sen. Ifeanyi Okowa, representing Delta North in the senate, saying that she had outstanding performance as a teacher.

Responding on behalf of the appointees, Mr Nduka Okonkwo, thanked the governor for the appointment, pledging their commitment to realising the goals of the administration.

Ten of the 25 new permanent secretaries are women, with the education sector having the highest number.