I Made Kanekalon Hair Popular In Nigeria--Stephanie Okereke 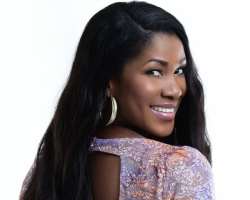 Few weeks ago, we reported that sultry actress; Stephanie Okereke-Linus was dropped as a brand ambassador of Kanekalon Hair. The screen diva, according to information, was dropped in February 2013.

After her contract with the company expired, it was not renewed and both parties went their separate ways.

The news story raised some dust and Nollywoodgists.com reached out to the 2002 runner-up of the Most Beautiful Girl in Nigeria (MBGN) on the issue.

Speaking with us on the telephone last week, Stephanie explained that contrary to report that she was dumped by Kaneka Japan, makers of the hair product, what happened was that she didn't renew her deal with them after it expired.

She further explained that most Nigerians got to know about Kanekalon air through her. “I made Kanekalon popular in Nigeria, even though many don't get the pronunciation right,” the wife of Linus Idahosa told Nollywoodgists.com.

She added that, “a lot of people (the media included) are not well informed on what Kanekalon Hair is. People think the hair is like hair extensions that are sold in the market like 'Amigos', 'Expressions' and others, but it is not.

“Kanekalon is the fibre that is used to produce these hair attachments. It is like a raw material used in making these hair extensions. So, you don't expect me to go to the market to buy 'Kanekalon Hair', no.”

Stephanie quipped that her relationship with the producers of Kanekalon is still cordial.