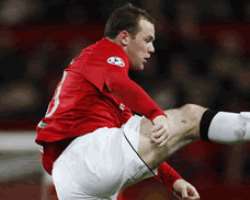 Rooney is likely to face competition from the likes of Cristiano Ronaldo, Lionel Messi, Fernando Torres, David Villa and Gonzalo Higuain to be top goal scorer in South Africa.

Wayne Rooney has scored 26 goals in 31 appearances for Manchester United this season, but missed the match with Wolves on Sunday due to injury, he is now an injury doubt for the Champions League match with AC Milan on Wednesday.