By Tingba Muhammad, and the NOI Research Group 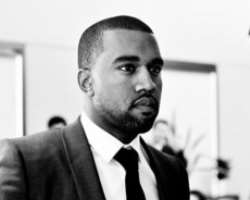 Black entertainer Kanye West has now joined the elite ranks of some of our most powerful and prestigious Black freedom fighters, such as Martin Luther King, Marcus Mosiah Garvey, Malcolm X, Bishop Desmond Tutu, the Honorable Minister Louis Farrakhan, and even our late great freedom fighter Nelson Mandela. For they--like Kanye--were all labeled "anti-Semites" by the Anti-Defamation League of B'nai B'rith. Not that they are, or ever were, "anti-Semites," but they all have advocated setting Blacks on an economic course for their survival and advancement, a route to true power that is exactly the opposite of the dead-end path Jewish financiers of negro leadership have demanded that we go down--and this deeply troubles Jewish watchdogs like Abraham Foxman and all the other "liberal" Jewish groups.

Kanye West took great umbrage at the ADL insult and at his Chicago concert last week he was defiant, telling the crowd that he spoke with The Honorable Minister Louis Farrakhan and that he wasn't apologizing for anything, saying to the contrary that he will be standing up to his accusers even stronger.

And in that "turn up" vain we will clearly show the political power wielded by Jews is the result, the consequence, the product of their immense economic base and superstructure--not the other way around. Bro. Kanye's recent powerful statements about his frustrating foray into the clothing and apparel business show the workings of a man who has chosen to be more than an entertainer: he is wisely seeking to use the wealth he has generated to build a truly lasting economic foundation. As The Secret Relationship Between Blacks and Jews, Vol. 2, shows, Jewish dominance in the fields of business, trade, commerce, and finance started with Black labor--from the Southern cottonfield investments of the Rothschilds, to the Alabama slave-dealing of the Lehman Brothers, to the Jewish "needle trade" sweatshops of New York. Kanye West's attempt to penetrate that history and those business connections is a formidable venture and worthy of full Black support. It is also why Abraham Foxman and the Jews have targeted him so directly. They are protecting their market, not "exposing anti-Semites." Make no mistake about it.

In his latest ploy Foxman says he decries West's comment in a radio interview on November 26, when, explaining the massive resistance to Pres. Barack Obama, the Hip Hop star said, "Black people don't have the same level of connections as Jewish people." Foxman feigned outrage: "There it goes again, the age-old canard that Jews are all-powerful and control the levers of power in government." By all standards of honesty and truth West's comment could not have been more benign. Indeed, Bro. Kanye's comment is so understated that it might almost be considered naïve.

Let us look carefully at this contentious issue of Jewish power, but not through Black eyes, or Kanye's eyes, or even Minister Farrakhan's eyes. Let us look solely and exclusively through Jewish eyes.

Foxman's own organization, the Anti-Defamation League of B'nai B'rith (ADL), once had a president named Simon Wolf, who in 1926 wrote with evident pride:

"We all know that the first bankers of the world--Rothschilds--are Jews; we know they control not only the money market, but also the political destiny of the European world....[M]ercantile enterprises owe a vast debt to the Jew. You need but look at the streets of the principal cities of the world on Jewish holidays, and you will at once see that trade is in mourning; the busy hum is hushed; everything is languid."

In fact, according to the Universal Jewish Encyclopedia (1948), "In Eastern Europe there were very recently countries in which 90% or more of the trades was in Jewish hands; in some branches of trade and export they controlled the entire 100%."

Now that has to be "anti-Semitism"! Kanye did not come anywhere near such statements. Let's go back to a time when Black people felt this Jewish influence most acutely.

The leading Jewish historian and rabbi Marc Lee Raphael wrote that "Jewish merchants played a major role in the slave trade." Nine out of ten Africans were shipped to Brazil, where Jewish "connections" were so influential that on Jewish holidays the slave auctions had to be postponed, because all the buyers and sellers of African men, women, and children were at the synagogues--"preying." Indeed, Wiesenthal Center scholar Dr. Harold Brackman has pointed out that "slave trading in Brazil became a 'Jewish' mercantile specialty in much the same way it had been in early medieval Europe."

In America, the average slaveholder held about 7 slaves, but the Nation of Islam has documented dozens of Jewish slave-dealers advertising the sale of as many as 210 slaves on a single day! Hundreds of these advertisements are collected in the recently released Nation of Islam book Jews Selling Blacks: Slave Sale Advertising by American Jews. And, according to Dr. Brackman, "Jews were about twice as likely to be slave owners as the average white Southerner."

In Hollywood, the entertainment capital of the world, Los Angeles Times columnist Joel Stein strongly disagreed with Foxman, writing that "Jews totally run Hollywood." In this opinion he joins the Jewish movie director Rob Reiner, who wrote of the movie industry, "It's all run by Jews." Scholar Charles Silberman: "The motion picture industry was largely a Jewish invention," and though they are less than 2 percent of the population, Jews are an astounding 60 percent of the "movie and TV elite."

But it is in politics where Jewish power is most felt and most feared. Two academicians--not rappers--Professors Stephen Walt and John Mearsheimer, produced a groundbreaking work titled The Israel Lobby and U.S. Foreign Policy, which opened many eyes to the powerful influence of the Jews in America. They argue that Jewish lobby groups like the American Israel Public Affairs Committee (AIPAC) have "significant leverage over the Executive branch," that is to say, the White House and the President. Jewish power in media, they say, gives Jews the unique ability to make sure that "the Lobby's perspective on Israel is widely reflected in the mainstream media."

Scholars Walt and Mearsheimer maintain that AIPAC in particular has a "stranglehold on the U.S. Congress," because of its "ability to reward legislators and congressional candidates who support its agenda, and to punish those who challenge it." Reinforcing this statement is the plain fact that Jews are only 1.7 percent of the American population but 5.4 percent of Congress--12 Jews in the Senate and 22 in the House of Representatives. On the contrary, Blacks, who are 12% of the population, have one senator who reached there on a technicality, the other in a special election.

If you are counting, that's two of the three branches of government with inordinate Jewish representation. And in the third branch, the Judicial, of the nine Supreme Court Justices, three of them are Jewish.

That's power.
Let us look at how others have framed this Jewish political reality. Jewish political commentator Bill Maher stated flatly on his television show, "Based on every statement I've heard from every Republican in the last two years, the Israelis are controlling our government." And when he said that, the studio audience gave him a huge applause. Kanye West did not go that far, but the ADL issued no press releases or charges against Mr. Maher. Republican Senator Chuck Hagel, who is now the Secretary of Defense, wrote that "The Jewish lobby intimidates a lot of people up here [in the Senate, but] I'm a United States senator. I'm not an Israeli senator."

Now let us go to the White House and see what Vice President Joseph A. Biden says on this issue. He officially proclaimed to a gathering of Jews celebrating Jewish American Heritage Month: "No group has had such an outsized influence per capita." And then, referring to the American social and political trends and movements (and specifically to same-sex marriage), he made a startling statement: "I bet you 85 percent of those changes, whether it's in Hollywood or social media, are a consequence of Jewish leaders in the industry. The influence is immense, the influence is immense."

Then Mr. Biden contradicted Jews like those at the ADL who have spent decades destroying the reputations of people who say exactly what Biden said next: "I think you vastly underestimate the impact you've [Jews] had on the development of this nation. We owe you, we owe generations who came before you."

There was no condemnation of Mr. Biden for having made "bigoted" and "bizarre" "canards" about "Jewish control," and the ADL website to this day has made no mention of this stunning pronouncement from the Obama White House.

All of the above have escaped the onerous ADL label of "Anti-Semite" because the speakers are Caucasian and have the ability to resist the charge. Kanye West is from a people who have been systematically emasculated by an ongoing Holocaust that is now, by Allah's grace and mercy, coming to an end. Abraham Foxman represents that ancient force Jesus spoke of in Rev. 2:9, 3:9, "the Synagogue of Satan." For Jews, our continued subjection and dependency are just good business.

The Minister was alluding to all this history when he said, "Mr. Foxman, I wish you and I could have a dialogue. You wouldn't put that small-time stuff over on me." Then, referring to Kanye's comments, he rhetorically asked, "Did he lie? No! He told the truth. Kanye West, you have nothing to apologize for! It is their fear of The Truth. And that is why it gives me pleasure to defend my brother."

Kanye knows he has Truth and History on his side. And best of all, he has--we all have--The Honorable Minister Louis Farrakhan as our defender. We have already won.

(Tingba Muhammad is a citizen of the Nation of Islam)