Why Is Dan Foster stares at Kate Henshaw? 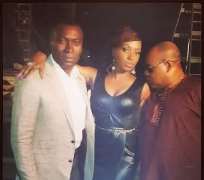 Daniel 'Dan' Foster - popularly known as The Big Dawg is a Nigerian-based American radio presenter. Formerly an Idol series judge, he currently has a similar position with the Nigeria Got Talent, Foster has a son, Joshua, from his previous marriage. Now married to a Nigerian, Lovina, the couple are parents of daughter Daniella and son Somtochukwu, but wondering why a married man would be looking down at another woman's b**bs.