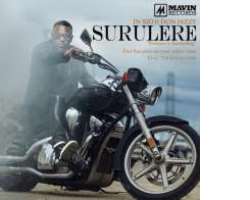 Mavin artist Dr Sid who held his introduction ceremony with his wife to be a few weeks back dropped his sophomore album this evening called 'Siduction', which is an infusion of Dr Sid's persona into the word 'Seduction' and is defined as 'The art of charming someone and appealing to their senses through Dr Sid's music'. His much anticipated album which has finally been released to the world is on sale on iTunes. His first album 'Turning Point' features club bangers like 'pop something', something about you' and 'over the moon'

Tracks of interest on the Siduction album include the'Surulere' with Don Jazzy and also the remix featuring Igbo rap sensation Phyno and Wizkid.The album also features special guest appearances from Don Jazzy, Tiwa Savage, Emma Nyra, Ice Prince and Alexandra Burke. The album has 18 new tracks and and 2 Bonus tracks, with a run-time of 74 Minutes.