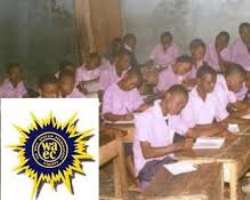 Eguridu, who spoke at a  press briefing in Lagos on Thursday, expressed disappointment at the recurring mass failure by Nigerian students who participate in the exam in recent years.

He call the press briefing to announce the release of the Nov/Dec 2013 WASSCE.

On the possible reasons for the continuous recording of students' mass failure in the past few years, the WAEC boss was not fortcoming with explanations.

He said the council was not in the best position to decipher the reasons, but noted that majority of the candidates who wrote the examinations this time were working class people who most likely did not have enough time to give appropriate attention to their studies.

He disclosed that a total of 308,217 candidates registered for the examination out of which 296, 827 candidates consisting of 163, 659 males and 133,168 females sat the examination. And out of the total number of candidates, 299,784, including absentees have their results fully released.

According to Eguridu, some papers belonging to 8,433 candidates representing 2.74 per cent of the total number of candidates, Eguridu are still  being processed due to some errors candidates made in the course of registration or while writing the examination.

Only a diminutive 86,612 candidates representing 29. 17 per cent of the 296, 827 total number of candidates who sat the examination obtained credits and above in five subjects including English Language and Mathematics.