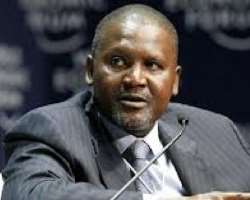 Pan African conglomerate, the Dangote Group has said that its donation of N50 million to the 2013 Lagos Count Down, a project of the state government, was meant to stimulate the economic activities during this year end and help showcase the natural richness of the state.

The Group had shown leadership among other corporate entities, when it signed up as a lead sponsor with a N50 million donation to ensure the success of the event, expected to attract people across the globe.

A statement from the Group indicated that the decision of the Company to support the State was in line with its avowed commitment to contribute significantly to efforts at creating avenue for economic boom and enhancement of the welfare of the people.

It stated that that the Lagos Count Down would generate economic activities within the period and lift the peoples' spirit while at the same time exposing the tourism potential of the state as the event takes place at the Lagos beach. Countdown, which is packaged by the Lagos State Signage and Advertisement Agency (LASAA), marks the crossover from a year to the next in spectacular grand style.

The Managing Director of LASAA, Mr. George Noah, who spoke at the pre-countdown parley with sponsors and ambassadors, said players in the entertainment industry, sponsors of the event and government officials were already on ground to assure the public that this year's event would be great.

Giving the history of the event, he explained that the first countdown took place in New York in 1903 with 200,000 people in attendant, saying that as at today over one million people graced the occasion annually in the US, with about $5 billion pumped into the nation's economy.

According to him: “In Lagos, we will like to replicate what is happening in other parts of the world. The countdown is not only about entertainment, it is about creation of employment; it is about commerce, brand development and encouraging brand loyalty.

“About 50 artistes are expected to grace this occasion, it is the biggest countdown in Africa. Countdown is about pleasure and beautifying the environment with lighting and so on. At countdown, we talk about inspiration of what we want to achieve in the New Year,” he explained.

Noah said the task this year was to drive human traffic to the Bar Beach for this year's event as LASAA was set to host the event in partnership with the private sector, saying that the agency was already creating serious awareness about the event and working in tandem with the sponsors to leverage in the countdown event.

He was optimistic that this year's event would be bigger and most interesting, adding that the agency was pushing to have the event mentioned in the media about 300 times.

Now in its second year, the event heralds what is fast becoming an enduring tradition in Lagos State. A viable platform for commerce, encouraging brand development, job creation, leisure, entertainment and tourism - the Countdown offers an unforgettable array of thrills and spills for all ages.

On the programme are music performances, an enchanting cascade of lights, fireworks and pyrotechnics - turning the entire Bar Beach, in Victoria Island, Lagos, into a melting pot of culture and commerce.

Meanwhile, Dangote Group said it would always throw its weight behind any event or programme that would add value to the life of the citizenry because the mission of the Group is to positively touch peoples life