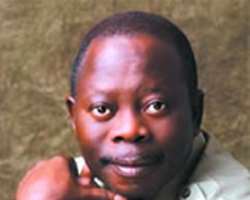 Stop harassing Oshiomhole, CNPP tells Reps
From FRANCIS AWOWOLE-BROWNE, Abuja
Tuesday, March 9, 2010
For calling on security agencies to probe the political crisis in Edo State, the Conference of Nigeria Political Parties (CNPP) has advised the House of Representatives not to meddle in the politics of the state but rather face its duty of lawmaking for better governance and strengthening of the democracy.

Secretary-General of the conference, Chief Willy Ezugwu, while reacting to the House resolution in a statement, condemned the position of the House on the political crisis in Edo State, saying it is diversionary, especially when the lower chamber has not been firm in taking decisions over the current political logjam threatening the future of the nation.

It would be recalled that the House had, after a rowdy session, called on the Inspector-General of Police and the Director-General of the State Security Service (SSS) to investigate allegations of forgery levelled against some Edo State House members.

The conference scribe argued that Nigerians expected more from the lawmakers but said the House leadership had been playing hide and seek game only to tow the line of the people much after the Senate had taken a decisive step, warning members of the House of Representatives to stop intimidating and harassing the Edo State Governor, Adams Oshiomhole.

According to him, the swiftness with which the House intervened in the crisis rocking Edo State Assembly left much to be desired when the same House leadership blocked all attempts by members to discuss the issue of President Yar'Adua's arrival in the country and his whereabouts.

'The country is currently having a constitutional crisis as it is and the House has not done anything beneficial about it. Ogun State House of Assembly had its share of upheavals and the House ignored it. Lives were lost and are still being lost in Plateau State and the House could not stop it. So, what is the interest in Edo State about?'

Chief Ezugwu reasoned that the interest of the House in the Edo matter smirked of partisanship because the matter over which the House was calling for investigation was in court.

'We call on the House of Representatives to rise and live up to people's expectation especially at this trying period in the nation's political development, rather than engaging in issues that are diversionary,' he stated.

The CNPP secretary-general said the House had engaged in so many probes but Nigerians are yet to see the outcome of them because none had been conclusive.

'The power probe for which Nigerians commended the House turned out to be a ruse as the House members involved in the probe were at the end arrested and are being prosecuted for billions of naira scam.'

He stated further that there were so many issues bordering on national challenges which the people would have loved the House of Representatives to deliberate upon and resolve but which it had been foot dragging. 'Electoral reforms, inability to achieve set targets in power generation, unemployment and constitution amendment are issues that are germane to the well being of the country and her nationals.'

The CNPP, he said, would like to appeal to the lawmakers to face squarely their task of law making for good governance of the country, pointing out that it is at this moment, more than ever before, that their impact should be felt by rising up to the occasion.

'The input of the National Assembly is very critical at this point in time; we are talking about how to move Nigeria forward in the face of the current political logjam occasioned by the sickness of President Umaru Yar'Adua, not a petty political struggle as in Edo state.'