The legislature and the corruption question – Guardian 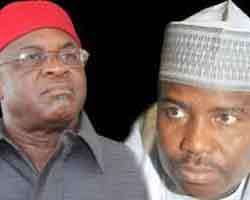 
It is a shame that the fight against corruption in Nigeria has not only stalled, so much talk about it does not seem to move to action, those who should be prosecuting the war.

Corruption, identified as the bane of Nigeria's development, must however, be fought to its end and talks about it can never be enough. Mercifully, three major events have recently, kept the issue on the front burner of national discourse. First, came the Transparency International 2013 Report which ranked Nigeria 144th most corrupt country among 177 countries.  Secondly, the African Development Bank (AfDB) recently revealed that $2.6 trillion is stolen annually through high-level corrupt practices on the continent. While the ripples of these revelations were still being felt, a third occasion to discuss corruption came via the 2013 International Anti-Corruption Day marked by the Nigerian Bar Association (NBA).  There, those in power too had a chance to bare their minds on the problem of corruption bedeviling the country. Speaker of the House of Representatives, Aminu Waziri Tambuwal, of course, joined the fray, and underlined the deepening impunity in government circles.

In particular, the poor performance of the anti-graft agency, Economic and Financial Crimes Commission (EFCC) came under the critical lens of the Speaker.  The influx of funds from grant-making bodies which has not been accounted for was specifically mentioned. The Speaker also questioned the pension fund scam, the misapplication of funds in the Security and Exchange Commission (SEC), the continuing illegality of the Federal Executive Council acting as a contract clearing house despite the constitutional remit of the Bureau of Public Procurement to that effect and bureaucratic double standard over which the relevant organisations have refused to act.

However, the Speaker seemed to have patted the back of the National Assembly which he claimed had done its oversight function provided for in the constitution. He claimed that the legislature had carried out probes and whose reports the relevant organisations had refused to pursue to logical conclusion. In the exercise of their disciplinary measures, according to him, the legislature had not spared any of its erring members such as Farouk Lawan who was suspended from house committees following his indictment. Besides, the House had passed into law the Freedom of Information Act (FOIA) to aid citizens' action in curbing corruption in the country.

This is impressive talk. There is no doubt that the body language of the Presidency, as Tambuwal posited, not only seems to encourage corruption, it actually embraces it. And this is a tragedy for Nigeria.  But is it possible to exonerate the National Assembly from charges of corruption? There are many clauses in the constitution that empower the National Assembly to monitor the country's resources. For example, sections 59 and 80-89 give full powers to the National Assembly to appropriate funds for the running of the affairs of the country and also to act as watchdog over the use of the resources by ways of horizontal accountability and by means of its powers over the Auditor-General of the Federation. Sections 80(3) states that 'no money shall be withdrawn from any public fund of the Federation, other than the Consolidated Revenue Fund of the Federation, unless the issue of those moneys has been authorized by an Act of the National Assembly.' And of course, it must be done in the manner laid down by the National Assembly as stated in Section 80 (4) of the constitution. Also, Section 85 (4) specifically states that 'the Auditor-General shall have power to conduct periodic checks of all government  statutory corporations, commissions, authorities, agencies, including all persons and bodies established by an Act of the National Assembly'.

Above all, the power of impeachment engrossed in Section 143 gives the assembly the teeth to bite the executive. The National Assembly has yet to exploit this for effect.

The charges of corruption are grave and daily, the impression is given as though the executive has all the power in the world to make and unmake despite constitutional provisions to the contrary. It is in this context that the submissions of the Speaker, good as they sound, would amount to grandstanding intended for an audience already overwhelmed by maladministration of government. It should be emphasized that there is danger in riding roughshod over the people. For sure, the large-scale corruption pervading the country amounts to impunity.

The National Assembly could perhaps begin the remediation process by a certain self-purge and penitence in terms of reviewing its outlandish packages which rank it among the highest paid in the world. It would be edifying for the Nigerian National Assembly to also learn from the resentment to even the tokenist salary increase proposed by the Independent Parliamentary Standards Authority (IPSA) for the British lawmakers over their insensitivity to the ongoing economic recession in that country, despite several years of salary freeze.  It is only by such self-purge and the power of personal examples that the legislature can regain the moral high ground and be alive to its responsibility.