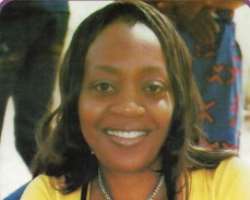 The Ika Federal Constituency standard bearer of the defunct Action Congress of Nigeria ACN into the Federal House of Representatives in the 2011 General Elections, Dr. Mrs. Isioma Okobah has dumped the All Peoples Congress with over 7,000 of her supporters for the ruling People's Democratic Party, PDP.
Dr. Mrs. Okobah told news men at a forum at Agbor that her decision to return to the PDP followed wide consultations among political leaders, wide spectrum of the political class, various shades of opinion, supporters and major stakeholders in the Ika Federal Constituency.
The US based medical practitioner who is reputed for her yearly free medical programme for the rural populace, disclosed that she could not but succumb to the yearnings and aspirations of her constituents who have consistently mounted pressure on her to return to her original party, the PDP.
Dr. Okobah observed that inspite of the current internal crisis rocking the party, the PDP remained a party to bit in any electoral context insisting that at the end of the day all contentious issues would be resolved without any major damage to the overall political fortunes of the party.
She described that the party as deeply rooted and firmly entrenched in the body polity pointing out that the internal conflict resolution mechanism within the party would be utilized to the greatest advantage of all party members and Nigeria at large.

Dr. Okobah maintained that Delta State is purely a PDP state adding that the last Delta central bye-election was an eye opener to all political watchers in the country.
She therefore called on all decampees particularly her erstwhile LGA coordinators and other supporters to henceforth participate actively in all political activities organized by the Peoples Democratic Party at all levels.
It is on record that Dr. Mrs. Isioma Okobah recently donated hospital equipment, empowered the disabled and single handedly built and equipped an ultra modern hospital at Igbodo, Ika North east, Delta State for the treatment of the rural populace free of charge.
It will be recalled that in the build up to the 2011 general elections, Dr. Isioma Okobah defected to the defunct ACN and contested the Ika Federal Constituency seat into the Federal House of Representatives on the platform of the party.