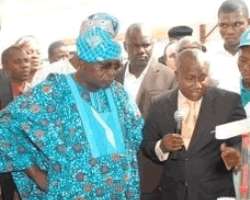 A silent revolution aimed at addressing the glaring rot in public schools in Osun State has commenced. For teachers and students, a new dawn has begun in the educational advancement and technological development with the establishment of Osun State Educational Resource Centre (OSERC) to re-train teachers.

The state government decided to take the bull by the horns to address the problem associated with poor performance of students in external examinations, especially in core science subjects of Physics, Chemistry, Biology and Mathematics.

The centre which was flagged off in August last year and located within the premises of the state Technical College, Osogbo, has been playing host to Science and Mathematics teachers across the state. Indeed, the teachers are back to the classroom, doing what they had all along been doing to their students all these years viz; class test, home work, group discussion and examination.

An Israeli consulting firm, Skill G Nigeria Limited, was engaged by the Oyinlola administration to reposition the teachers for the task of the new millennium. Skill G, as popularly called, would also supply Mobile Examination Laboratory (MEL) kits dubbed 'labless lab' for the use of the teachers and students alike.

During a tour of the facilities by Daily Sun, it was gathered that the training programme involved selected teachers across the 574 secondary schools and 1,050 primary schools. They were to undergo five days intensive training session commencing from 6.20a.m and closing by 8-30p.m every day.

Beneficiaries of the training programme are expected to train others in their respective schools in a train-the-trainer arrangement. And the good news is that the labless lab kits would be supplied to all the schools.

The main purpose of the programme, according to the Regional Manager, Skill G Nigeria Limited, Mr. Shlomo Tzafrir, is to make science subjects easy to teach for the teachers and easier to understand by the students.

'The bedrock of this project is a new methodology developed in Israel for the 21st Century on how to teach scientists and science materials such as Biology, Chemistry, Physics, Mathematics and Primary Science. This methodology was developed in Israel by a group of professors from the White Institute, which is one of the leading science institutes in the world.

They created a company which is called Science Demo and they develop the kits for teaching these science subjects.

'Later on when we came to Nigeria, we took all the books and syllabus from primary to secondary schools to Israel and from there we developed a complete programme on how to instruct the teachers of the schools; those handling science subjects from Primary One to Primary Six and from Junior Secondary School to Senior Secondary School as well as how to prepare the students for WAEC and NECO examinations' Tzafrir explained.

The new science teaching methodology is expected to make teaching and learning not only real and interesting but participatory in nature. It would offer the pupils the opportunity to identify the kits or apparati as well as the reagents while participating actively in the experiments.

'Many students offer science subjects without a knowledge of how science apparatus or equipment or even the laboratory are', Tzafrir pointed out.

'When the teachers come in, we normally give them test. For the secondary school teachers, we give them WAEC questions to answer. If you are teaching secondary school students and you are preparing them for WAEC examination and you yourself cannot answer questions, then there is a problem.

'So, we have a standard. If you score less than 60 per cent, we would send such teacher back because we are going to train them and they are going back to train other teachers. So, if the teacher is not good enough; if he or she does not have the basic knowledge, there is no way he or she can comprehend what we have for him or her here.

'So, we would ask the principal of such teacher to send in another person but not for that week again. It would be for another week. Each of the schools has two or three teachers per science subject. The three of them cannot be here at the same time. So what we do is that we train one of them being selected by the school authority. It is the trained one that will go back to their school to go and train others. That is what we called 'train-the trainers'', he explained.

For the primary school teachers, Ayo-Bada further stated, that the qualifying test to participate in the training programme were based on the common entrance examinations. Interestingly, he disclosed that many teachers, both at primary and secondary levels, have been sent back from the training as they failed to score up to 60 per cent.

'If you are teaching the primary school pupils and you cannot sit for the examination the pupils sit to enter the JSS class, then you have no business being here. If you meet these people outside when we are not there, they will tell you a lot of things. We do cane them when they go wrong.

'The rule here is very strict. We have so many teachers that failed the entrance test. So, what we decided is to give them test everyday because some of them had already forgot what they learnt 40, 50 years ago. What we are trying to do is hard and difficult. We give them tasks to research on', Ayo-Bada stated.

At the end of the training of each batch on Fridays, he said that the participants would be given certificates that would certify them as 'worthy' of teaching science subjects in their respective schools.

Mr. Simeon Bisi Agboola, Director of Higher Education, Science, Mathematics and Technical, in the state Ministry of Education applauded the initiative of Governor Olagunsoye Oyinlola, saying the present efforts, geared towards reviving science education in the state, would put a stop to the problem of mass failure in science subjects among students from the state.

Agboola, who disclosed that a whopping sum of N2.6 billion was committed to the training on instalmental basis, also disclosed that 30 model schools have already been penciled down for the evaluation of the scheme and the progress being made.

Summing up the total concept behind the training project, Governor Oyinlola, speaking through his Chief Press Secretary (CPS), Mr. Lasisi Olagunju, said that his government engaged the Israeli company because of the urgent need to stem the tide of failure in Mathematics and the sciences in external examinations.

His words: 'If children are introduced into science at the primary school level, by the time they get to secondary school, it will no longer be strange to them. Every primary and secondary school in this state will have these kits. Teachers are also being trained. We are already halfway. 'All the nine technical colleges in Osun state will be upgraded and properly equipped with the necessary laboratories and workshops. It is our vision that graduates of these schools will become employers of labour and assets to the nation. In the developed world, middle level manpower produced by such schools form the core of employable people in the formal and the informal sectors. We believe we can make a difference in this area too', the governor said.

Chairman, Osun State Board for Technical Education, Professor Olu Aina, corroborated the vision of the governor, saying plans were under way to further build 34 laboratories for Chemistry, Biology and Physics as well as ICT centres in the nine technical colleges owned by the state. Specifically, he added that there were 36 workshops, one on each of the four trades offered in the colleges for each of the nine colleges.

Aina, however, expressed worry at the poor enrolment in the colleges, which he put at less than 2,000, hoping for an improvement in the next one year with the plans on ground by the Oyinlola-led administration.

Beneficiaries of the training programmes were full of appreciation to the government, although they described the training session as 'too challenging and rigorous'. A spokesman of the teachers, Mr. Olatinwo Olafimihan, from L.A. Primary School, Obada B, Ede, commended the initiative saying, it would impact positive.