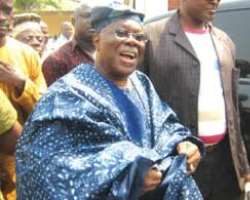 
More than three years after serving a two-year jail term in Kirikiri Maximum Prison for contract splitting, the Supreme Court in Abuja on Friday reversed the conviction of the former Deputy National Chairman of the PDP, Chief Olabode George.

The judges of the apex court, headed by Afolabi Fabiyi, in their judgment, ruled that the charges of contract splitting, on which the EFCC arraigned and secured the conviction of the politician, was unknown to law of the land.

The apex court ruled that the EFCC, which prosecuted George, did not sufficiently prove that the defendant had an intention to commit fraud at the Nigeria Port Authority.

George and other board members of the NPA, where the politician was  the chairman, were convicted and sentenced to two years imprisonment byJustice Oyewole of a Lagos High Court for contract splitting.