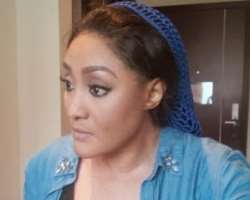 In June 2012, the marriage of controversial man of God, Rev Chris Okotie crashed. The pastor, after he reportedly claimed that God had ordained his relationship with pretty Stephanie Henshaw, married her in 2008. This was after the former secular musician turned pastor divorced his ex-wife.

After the crash of her marriage, Stephanie has been on the low key. She recently released a picture, which found its way on the internet.

In the latest photograph of the sexy mother of three, the joints of her fingers seem to have gone awful. The joints appear black, which has caused the speculation that she is bleaching her skin.

Some have described it as 'bleaching gone bad'.