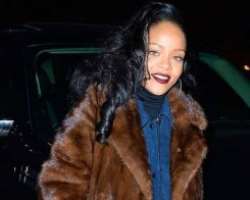 Bajan beauty Rihanna has been ordered to attend a deposition in court over a $6.9 million lawsuit she filed in 2011 against LaRocca Inspection Associates Inc for breach of contract. The singer reportedly sued the company over water leaks at a mansion she acquired in Beverly Hills, California in 2009 which she later sold for loss of up to $2 million.

According to documents obtained by RadarOnline.com on Wednesday, Rihanna hired LaRocca Inspection Associates in August 2009 to conduct an analysis of the property for repairs to be fixed by the owners. The singer alleged in court documents that LaRocca did not make sure water seepage problems in the hardwood floors were fixed before she closed escrow on the 8,500sq ft home for $6.9 million. Reports by Uk's Daily today claim the lawsuit says heavy rains in 2010 flooded several rooms in the mansion and extensive leakage followed.

According to DailyMail, 'the company's lawyer Gregory Pyfrom in court papers sought $7,500 in compensation for efforts over the past two years to depose Rihanna. But Rihanna's attorney Miles Cooley countered that Rihanna has 'consistently agreed' to be deposed and that both sides agreed not to depose the singer until after the matter was mediated. Cooley also countered that Rihanna's deposition was delayed several times due to Pyfrom's vacation plans. However, the judge denied Pyfrom's request for compensation.

Rihanna filed the lawsuit under her given name Robyn Fenty and alleged negligence, fraud and breach of contract.