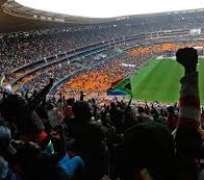 
US President Barack Obama led world tributes Tuesday to Nelson Mandela, hailing him as 'a giant of history' at a rain-soaked memorial attended by tens of thousands of South Africans united in proud, noisy celebration.

Obama was one of nearly 100 world leaders at the event in Soweto's World Cup stadium, where songs of praise and rebellion, many harking back to the apartheid era that Mandela helped condemn to history, echoed down from the dancing crowds in the stands.

'It is hard to eulogise any man … how much harder to do so for a giant of history, who moved a nation towards justice,' Obama said, after being introduced to wild cheers.

'He showed us the power of action, of taking risks on behalf of our ideals,' Obama said of the prisoner-turned-president whose life story earned uncommon universal respect.

In a nod to Mandela's extraordinary global reach, popularity and influence, the Indian, Brazilian, Cuban and Namibian presidents all delivered eulogies extolling his courage and moral leadership.

But it was Obama's impassioned tribute that really galvanised the crowd, which at times became impatient with the long roster of speakers and a poor sound system that dampened the spontaneity of the occasion.

The four-hour event began at midday (1000 GMT) with a stirring rendition of the national anthem, Nkosi Sikelel' iAfrika (God Bless Africa), led by a mass choir and picked up by the rest of the stadium.

Some 80,000 had been expected, but the venue was two-thirds full as the ceremony got under way under a curtain of rain that had been falling since the early morning.

Despite the profound sense of national sorrow triggered by Mandela's death last Thursday, the mood was upbeat, with people determined to celebrate the memory of one of the 20th century's towering political figures.

On several occasions, Ramaphosa felt forced to admonish boisterous sections of the crowd for chanting during the speeches.

In his tribute, UN Secretary General Ban Ki-moon noted that Mandela had managed to unite people in death, much as he had in life.

'Look around this stage … we see leaders representing many points of view … all here, all united,' he said.

The handshake was seen by millions watching the memorial being broadcast live around the world, and comes as Obama tries to make good on a vow to reach out even to US enemies.

Crowds had begun gathering at the Soweto stadium before daybreak and, as the gates opened, they swarmed inside the venue where Mandela made his last major public appearance at the 2010 World Cup final.

Wrapped in the South African flag or yellow and green shawls printed with the slogan 'Mandela Forever', they danced and sang - oblivious to the constant drizzle.

'He's God given, he's God taken. We will never stop to cherish him,' said Shahim Ismail, who took a day off from the sports academy he runs in Johannesburg to attend the event.

Mandela's widow, Graca Machel, received a huge ovation as she took her seat on the main stage erected at one end of the pitch.

News of Mandela's death at his home in Johannesburg resonated around the world, triggering a wave of loving admiration from political and religious leaders, some of whom agree on little else.

But in his tribute, Obama took a swipe at authoritarian rulers who spoke of embracing Mandela's legacy without acting on it.

'There are too many leaders who claim solidarity with Madiba's struggle for freedom, but do not tolerate dissent from their own people,' he said.

The memorial event was part of extended observances that will culminate in Mandela's burial on Sunday in the rural village of Qunu where he spent his early childhood.

South African President Jacob Zuma, who was roundly booed by sections of the crowd in a reflection of growing public dissatisfaction with the current generation of ANC leaders, hailed Mandela as a 'fearless freedom fighter.'

Although Mandela had been critically ill for months, the announcement of his death was a body blow for this recently reborn nation.

He had been out of public life for more than a decade, but South Africans looked to his unassailable moral authority as a comforting constant in a time of uncertain social and economic change.

Ahead of the burial in Qunu, Mandela's body will lie in state for three days from Wednesday in the amphitheatre of the Union Buildings in Pretoria where he was sworn in as president in 1994.

Each morning, his coffin will be borne through the streets of the capital in a funeral cortege.