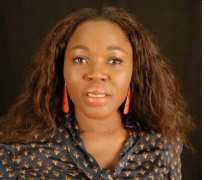 When in November 2013, an up and coming Yoruba actress, Yetunde Akilapa, was accused of being in possession of 100 bunch of master keys was released, many jumped in jubilation that she didn't end up in jail, unlike some unlucky people who would have rot in the prison.

Her matter was in the news in February 2013, when it was reported that she was arrested for robbery by the police in Alade, in Somolu area of Lagos State. She was later taken to court by the police for prosecution, but she was discharged and acquitted after the court said her prosecutor didn't present a proper case that could lead to her conviction.

In an exclusive phone interview conducted by First Weekly Magazine last week Thursday, Yetunde, who is in the Odunfa Caucus of the Yoruba film industry headed by veteran actors; Taiwo Hassan aka Ogogo and Yinka Quadri, alleged that her friends set her up, which was why she went through the bitter experience, all because of a little misunderstanding.

Yetunde confessed to First Weekly magazine that she has since stopped her relationship with those, who implicated her. She disclosed that her friends, who got her into trouble, even behaved as if they were trying to help her out of the case, but that they were actually behind her being thrown into the police net and taken to court.

There is a rumour that you were set up by your friends, how true is this?
Yes, it's true. Some of my friends set me up.

Why did they do that to you?
Let me narrate everything to you from the beginning. I am into business, I sell weave-ons. I learnt hairdressing before joining acting, it was just that I had no time for the business because of my acting career. I used to have a salon at Bariga area of Lagos State, but I left the place for a friend, Titi, who is a cousin to my boyfriend, Wale. The only thing I didn't give her was the weave-ons in the shop. I told her to sell them, and that she should give the money to my younger sister, who lives near the shop. However, she refused to deliver the money she made from the sales to my sister. I later went there to pick up all my things in the shop and requested for my money. To my surprise, she claimed that there was no money with her because a lot of people owed her.

An argument ensued between her and my sister, which resulted into a fight during which she stabbed my sister. I reported the matter to the police, who arrested and detained her. Her cousin, who was my boyfriend, and others were against me over the action and pleaded with me to withdraw the case from the police, which I later did.

So, how did the set up happen?
There was a woman I met at Next Salon at Akoka, Lagos, who liked what I sell. I told her I could do home delivery. We exchanged numbers and she gave me her address. She stays at Fola Agoro, which is near my place at Bariga all in Lagos. Most times when she calls me to deliver some weave-ons for her at home, I would either at locations or busy with something else. I later tried to call her on the phone, but it was not going through.

One day, I decided to visit her at home. On getting to the place she gave as her residence, the place was quiet as I didn't see anyone outside. It is a block of six flats at Fola Agoro. I knocked a door and someone came out to attend to me. Bu,t when I asked to see the woman, who told me she is called Mama Ayo, the lady that attended to me claimed there was nobody like that in the place. The woman thereafter called other tenants and accused me of being an informant because she said they had robbed the house in December 2012, and this incident happened in March.

Before I could say Jack Robinson, they started shouting at me. I told them I was an actress, but nobody listened to me. They ransacked me and found a bunch of keys on me, which has about 15-20 keys. They claimed they were master keys I used for robbery. Even when an actress friend of mine, Queen Oluwa, called my phone when I was there, they claimed she was trying to know how successful my surveillance was.

On a particular day, when of my accusers came to the police station as directed by the police, he was surprised that I slept over at the station. He told my sister that he had informed the police that I should be released since it was confirmed that I was an actress and not a thief. He later signed a document with the police that I should be released. I was happy that the matter had been resolved, but unknown to me, this was the beginning of a big problem.

The police later came to tell me that my house would be searched in the afternoon. I asked them to tell me the reason for that, but they did not tell me anything. During this time, Wale and Titi were in the DPO's office, and I thought that they were negotiating my release. The police that searched my house reported back to the DPO and presented the receipts to him.

At the DPO's office, a guy interrogated me and introduced himself as a PM. I thought he was a Production Manager, but unknown to me, he was a journalist from PM News. It was later I got to know about this. He was the one that reported in the media that I was sent to Kirikiri Prison for robbery.

After leaving the DPO's office, I was told that I would be charged to court. Three days after, I was charged to court.
My friends were behaving as if they were behind me. Even when my sister helped in securing a lawyer for me, my friends said he was a not a good one and offered to get me a good lawyer. I didn't agree to that, maybe I would have rot in jail if I had not rejected their offer.
.
But how did you come about the 100 bunch of keys?
This was the handiwork of the journalist that broke the story. When I even asked Titi about the media report, she rained abuses on the PM News guy that he was a stupid person. Titi told me that she knew the guy was a journalist and that she was giving me signal at the DPO office not to respond to his questions, but that I didn't notice.

Even my bosses (Ogogo and Yinka Quadri) were annoyed with me that I didn't inform them about the whole matter. I told them I never thought it would turn out to be what it became. They stood solidly behind me despite everything.

Let me tell you something, Titi dated the DPO because of my matter. I later got to know the whole truth of the matter later. I would have rot in jail but God helped me out. She was jealous of how I get money to do some things.

Do you still relate with Titi?
Never, such a person should not be mingled with at all because she is a dangerous element.