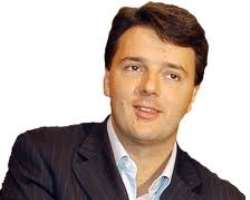 
The rising star of Italy's political left, Matteo Renzi, has resoundingly won the leadership of the Democratic Party, making him a leading candidate to be the next prime minister.

Mr Renzi, 38, took about 68 per cent of the vote, giving him a strong mandate to lead the party into the next election.

Supporters hope he can reunite a weakened and divided Democratic Party.

The party failed to win a majority in this year's election, leaving PM Enrico Letta to govern in a fragile coalition.

Mr Renzi, the mayor of Florence, has been portrayed as a reformer, willing to break the influence held by members of the former Communist Party inside the Democratic Party.

But he insisted that his election was 'not the end of the left'.

'We are changing the players but we are not going over to the other side of the pitch,' he said.

Supporters in Florence acclaimed his clear victory over the other two candidates, Gianni Cuperlo and Pippo Civati.

Mr Letta said he looks forward to a 'fruitful' working relationship with the new leader of the party he helped found.

Mr Renzi has been compared to Britain's Tony Blair for his desire to remodel the left.

His support for cuts to taxes and public sector salaries is seen as likely to attract voters from the centre-right, who have been disenchanted by scandals surrounding its long-time leader Silvio Berlusconi and the collapse of his party.

Mr Renzi's rise is seen as a sign of much-needed generational change in Italian politics, says the BBC's correspondent in Rome, Alan Johnston