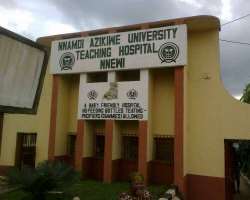 
THE  birth of Nnamdi Azikiwe   University Teaching Hospital came as a result of the genuine aspirations of the people in the present Anambra, Imo, and parts of Delta and Abia states, who hitherto had to travel hundreds of kilometres of bad  roads to the University of Nigeria Teaching Hospital, Enugu, to receive specialised hospital care services.

This aspiration of the people was backed by the government desire to provide quality health care for the citizenry and also an opportunity to train some of the teeming youths who are qualified and desirous to make medical practice and other professional training allied to medicine as a profession.

But today, Nnamdi Azikiwe University Teaching Hospital, Nnewi, as the symbol and representative value of   Zik's legacy   of championing   the aspirations of the people, is under   serious threats of infrastructural   and development   constraints; to such an extent   that NAUTH, still operating from the temporal site, do significantly diminish the stature of Zik as a national, continental and global democracy icon.

This attempt to draw attention to the history of NAUTH is to portray in proper perspective the constraints to meaningful growth and development as a result of the hospital having to remain for decades at the temporary site. It helps to strike a balance between the present level of development at the permanent site and also offer a useful insight into the limited range of funding from the Federal Government for the development of NAUTH since inception.

This also provides immediate basis and content for fruitful and significant appraisal of the range of problems involved in the development of NAUTH, as a national institution befitting the stature and eminence of a national and continental hero- the great Zik of Africa.

It is valid and worth saying, even in order to remind ourselves, that our culture and other cultures have known and accepted the fact that it does confer legitimacy and value-added sense of belonging and national pride, the application of the names of past national heroes and icons to edify institutions and places.   It helps to give future generations proper nationalistic orientation.

This is the imperative, at this time, as we prepare to celebrate the centenary of our existence as a nation, to bring to bear on the Nigerian national consciousness and focus, the state of one of the institutions in Nigeria that bears the name of one of our founding fathers.

The spread of NAUTH's community health care centres across AnambraState is projected to ensure initiation and implementation of programmes and other activities aimed at the provision of quality and timely healthcare services to the people, and at costs they can afford. It also envisions an increase in the quality and life expectancy of Nigerians by ensuring reduction of incidences of both communicable and non-communicable diseases with the aim of meeting the global target on the eradication of diseases and infirmities.

Quality of care in health service delivery is the extent to which actual care is in conformity with set criteria for good care. Quality of care has two aspects, namely:

* The quality of the provision of care within the institution.

* The quality of the care as experienced by the users.

The provision of care by the medical personnel and staff of NAUTH might be of the highest technical quality, but the pertinent and central factor of the current lack of space for admission of patients, provision of offices for consultants and other categories of personnel, and the congestion of people, facilities, vehicles and service units within the temporary location cannot make for effective and efficient healthcare service delivery.

Nnamdi Azikiwe University Teaching Hospital, since inception for more than two decades, has not received any intervention package to boost the pace of development at the permanent site. As a matter of fact, it will take more decades with respect to the nature of paltry capital fund releases presently, for the hospital to move to its permanent site, functionally.

The development of NAUTH, as a tertiary health care institution within the environment of its coming into being, is of a unique character. Much of the modern buildings complementing the old general hospital infrastructure at the temporal site existence of NAUTH since inception, were built and endowed to the hospital by private individuals and organizations from Nnewi community.

So, even as NAUTH should be seen as a national edifice befitting the eminence, role and place of the person   of Rt. Hon. Dr.   Nnamdi Azikiwe, first Nigerian President and frontline Pan Africanist, there is yet no trace of national identification with the project of the development of NAUTH.

Culturally, in nations that aspire to enthrone genuine national   consciousness and patriotic zeal in the citizenry, foundational elements of nation building are enhanced through deliberate elevation of national institutions, as are endowed to heroes past, to the highest level of excellence as models and symbols of national pride. This national identification should be accorded NAUTH at this initial stage of its development. This   will further boost and foster national cohesion, sense of value and collective responsibility for achieving national goals and objectives.   This road to nation building will usher positive developments in other sections and aspects of the national economy and socio-political process.

Nnamdi Azikiwe University Teaching Hospital has enormous potentials for growth and greatness. These abound in the technical expertise, resilience, doggedness and drive of the hospital's workforce and successive management administrations since inception.

But the evidence that the great Zik of Africa came from this part of the globe should be seen in the accelerated growth and development of the hospital at the permanent site, and not in the reflection of the intrinsic values and traits that remind emerging generations of a people about the stories of their parents survival of the civil war and the continuing alienation and disconnect from the national scheme of things.

The debt we owe our heroes past, for the sacrifices they made for us, can only be redeemed through changes in national attitudes and perception of objectives as regards the value and importance of national institutions and symbols of our existence.

It was not for any fault of Rt. Hon. Dr. Nnamdi Azikiwe, as a champion of the aspirations of Nigerians for independence, and the emancipation of the blackman, for which he labored and suffered, that Nnamdi Azikiwe University Teaching Hospital is made unable to attain its purpose. It is our collective shame as a nation.

Should we cease to have any sense of shame and guilt, therefore, the prospects and hope for greatness for this nation, Nigeria, as dreamed of by our founding fathers, will continue to diminish by the day.