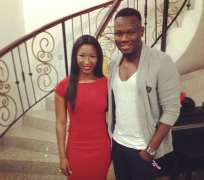 Going by a tweet posted by the fiancee of the son of late Justus Esiri, Dr Sid, the singer and his lover will hold their wedding introduction tomorrow, Sunday, December 8, 2013.

The Don Jazzy's Mavin Records artiste will start his journey to marriage when his family seek the hand of Simi Osomo in marriage. The duo got engaged in August 2013.

Simi was only called to bar last week after she passed at the Law School. Dr Sid is one of the artistes in Nigeria that has been in the industry for a long time.