Mandela ‘on his death bed, but still a fighter 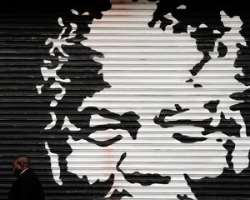 
Former president Nelson Mandela‘s family resorted to an unusual choice of words to describe his condition in an interview with SABC television news on Tuesday.

His daughter, Makaziwe Mandela, speaking off the cuff, told the broadcaster: “Tata is still with us. Very strong, as I said very courageous, even in [sic]… lack of a better word, on his death bed, I think he is still teaching us lessons. Lessons in patience, lessons in love, lessons in tolerance.

“Every moment, every minute with Tata amazes me… There are times when I have to pinch myself that I come from this man who is so strong, who is a fighter. Even when there are moments when you can see he is struggling but the fighting spirit is still there with him,” she said.

Makaziwe spoke to the SABC following the launch of the Nelson Mandela Opus in Johannesburg.

Mandela’s wife GraÃ§a Machel, his grandson Ndaba Mandela and other members of the family were also at the launch.

Ndaba said: “He is still with us. Although he is not doing well at home in bed. However, we felt that we needed to do something special for him.”

Mandela spent almost three months in hospital after being admitted to the Medi-Clinic Heart Hospital in June with a recurring lung infection.

Throughout his hospital stay, the Presidency reported that he was in a critical but stable condition.

The global icon was discharged in September and was receiving home-based medical treatment.

President Jacob Zuma visited Mandela at his Houghton home on 18 November, after which his spokesperson, Mac Maharaj said: “The health of the former president remains much the same as it was when President Zuma last visited him, which is stable but critical, while Madiba continues to respond to treatment.”