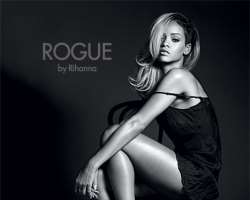 
Baby it’s cold outside, but Rihanna is aiming to heat up the holiday season with her sultry video spot for her Rogue fragrance. Set to the tune of “Right Now,” her hit single featuring David Guetta, the spot showcases Ri-Ri’s luxe new perfume and gives fans a glimpse at the singer behind the scenes of the fragrance photo shoot.

“People are always changing and evolving, and with Rogue, I wanted to switch it up to reflect who I am today. It’s a personal fragrance that’s more self-aware. It’s Rogue, it’s me,” Rihanna has said of the scent, which features top notes of pink peppercorn, bergamot, lemon blossom and cyclamen.

In addition to showing off Ri’s new fragrance, the spot also puts quite the emphasis on the singer’s many tattoos, with the camera panning up and down the scantily-clad star as she sits on a chair and poses seductively. In late October, after the ad was shot, the ink-loving star got another tattoo — that came at a high price.

Flying her New York City-based tattoo artists Keith “Bang Bang” McCurdy and Cally Jo to the Dominican Republic, Rihanna enlisted the duo to ink a henna-inspired design on her right hand to cover up another tattoo. (This followed a separate ink session in New Zealand, where Rihanna got her hand tattooed with a chisel and mallet, a painful method known as Ta moko.)

“I like hanging out in tattoo shops,” Rihanna — who is also inked with a trail of stars down the back of her neck, a handgun near her armpit, a falcon on her right foot, the Egyptian goddess Isis on her chest, and her best friend’s birthday on her shoulder — told Atlanta Peach magazine back in 2007. “Sometimes I get dressed and go to the tattoo parlors in [New York City neighborhood] SoHo and hang out. I am so intrigued by tattoos. It’s an entire culture, and I study it.”