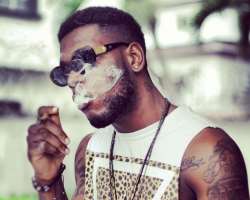 It has been confirmed that burnaboy dancehall star (real name Damini Ogulu) will leave his record label Aristokrat Records at the end of 2013.

He officially signed with the record label in 2011 and has perfected all arrangements to float his own at the start of 2014.

Burna has made this clear with Aristokrat even though the news of his departure has not reached the public.

A few weeks ago, the dark-skinned Port Harcourt bred act hinted at leaving the label. He said, "Change is about to happen. I know #BBG will stick with me no matter what. Watch out for future announcement. #BBG'. #BBG refers to his newly formed crew 'Burna Boy Goons'. The tweet was deleted moments later.

Little known Burna signed with Aristokrat in July 2011, released two mixtapes 'Burn Notice' and 'Burn Identity' in April and November 2011 respectively. He then went on to drop the mid-tempo hit record 'Like to Party' in mid-2012. With two other successful singles 'Tonight' and 'Run my race', Burna rose to fame, making a name for himself.

We are told that problem ensued when his debut album 'L.I.F.E' dropped in August 2013. Burna Boy wasn't pleased with the way the label handled the marketing and release of the album.

Contrary to reports earlier published, Burna did NOT get a N10m upfront payment for the album. The artiste feels the label should have done better – probably with a high budget album launch, major campaign etc.

'He can't be told anything to do, he's a big boy right now. He won't just listen anymore, the label are frustrated with his actions'.

As you're reading this, Burna has moved out of the house provided for him by the label in Lekki Phase 1 and relocated to house in Chevron Estate also in Lekki, Lagos. He has extricated himself from them and now handles his career with a former label employee who now only answers to him (Burna).

Unfortunately, insiders say there are issues with his new management structure. We're told his minders fumbled a recent deal with Guinness, asking for a 200 per cent increase in a proposed endorsement deal fee. They never got it and Burna was taken off.

We are also told that Globacom, the telecoms company that handed him a mouth-watering deal earlier in the year are not willing to extend his contract after his one-year deal lapses.

Burna is currently managed by his mother, Bose Ogulu who is the daughter of Benson Idonije, a veteran broadcaster and highlife critic who once managed Afrobeat creator Fela Anikulapo-Kuti.

Nike Oshinowo Welcomes Twins From Another Woman At 47

Evil People Could Be At Work,” Femi Kuti Feared Reptile In His Car

My Joy, I'll Love You Till Eternity--Mercy Aigbe's Birthday Message To Hubby