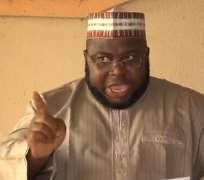 His lawyer, Festus Keyamo announced the arrest in a statement.

Keyamo's statement reads, 'Today, Tuesday, November 26, 2013, my friend and client, Alhaji Mujahid Dokubo-Asari, was arrested in Cotonou, Benin Republic, around the hours of 1:00pm and 2:00pm by the country's gendarmes (Police Force),'” Barrister Festus Keyamo said in a statement

'He was picked up around the Lubeleyi roundabout and taken to an unknown destination. We want to emphasise that Alhaji Dokubo-Asari carries on legitimate business and has been living partly in Benin Republic for many years now. In fact, he owns houses, schools and an academy in that country. All these places have been searched as at this evening and nothing incriminating was found. 'We think his arrest and detention is a ploy by certain forces in Nigeria in unholy alliance with the Beninoise government to keep him away as 2015 approaches.

Keyamo pleade with the  'Nigerian government to immediately intervene and ensure that no harm befalls Alhaji Dokubo-Asari and to use all diplomatic means to secure his immediate release and safe return to Nigeria. 'Meanwhile, we shall be liaising immediately with our colleagues in that country to enforce his fundamental rights.'