Church of England paves way for ordination of women bishops 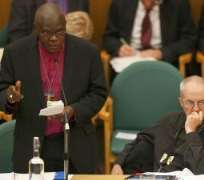 The Church of England’s governing body has voted overwhelmingly in favour of female bishops, ending a 20-year impasse that could see women ordained as senior clergy by the end of 2014.

A vote on a package of measures to endorse women bishops was supported by 378 members of the General Synod while eight voted against and 25 abstained after months of behind-the-scenes talks to unite reformers and traditionalists.

A year ago, a blocking minority succeeded in rejecting draft legislation on women bishops, leaving the church in crisis. That vote, lost by just six votes, was criticised by the UK parliament and one senior church official called it a “train crash”.

After that, church leaders set up a committee to find common ground. Its proposals won widespread acceptance in the Synod, even among groups previously opposed.

“The train is on the tracks, the train is moving forwards, and we now have some stations to pass along the way but we can begin to see the end of this particular journey,” the Bishop of Rochester James Langstaff told a news conference.

The legislation will be discussed again at a meeting in February and a vote on final approval is likely in 2014.

The issue of female clergy has divided global Anglicanism. Women serve as bishops in the United States, Australia, Canada and New Zealand but Anglican churches in many developing countries do not even ordain them as priests.

Critics of female clergy say Jesus chose only men as his apostles, while supporters say it is a matter of equality.

The spiritual head of the Church of England, Archbishop of Canterbury Justin Welby, supports women bishops but has struggled to unite the mother church for the world’s 80 million Anglicans on the issue.

Woman in Canterbury
Last year’s draft legislation failed mainly due to concerns that a code of practice to cater for parishes that objected to women bishops did not go far enough.

The new recommendations would create an independent official who can intervene when traditionalist parishes complain about women bishops’ authority and guidelines for parishes whose congregations reject women’s ministry.

Those in favour of the plans were warned not to “open the champagne bottles” just yet as there were still major issues to be resolved.

Prime Minister David Cameron told parliament: “I strongly support women bishops and hope the Church of England takes this key step to ensure its place as a modern Church in touch with our society.”

Even many traditionalists acknowledged it was time for change and to end the deadlock. Paul Benfield, of the Synod’s Anglo-Catholic group, said it was “a workable way forward”.

The Church approved the ordination of women priests in 1992, but delayed making them bishops because of opposition within its previously all-male clergy.

Bishops play a key role in many Christian churches because only they can ordain new clergy.

Amanda Fairclough, a priest from Liverpool, said she had “no doubt one day a woman will be called by God to be the Archbishop of Canterbury”.