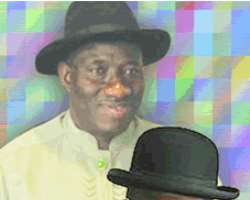 Aso Rock power play
Reverberations in Bayelsa
From Femi Folaranmi, Yenagoa
Sunday, March 07, 2010
Jonathan and Sylva
Since the February 9 installation of Dr Goodluck Ebele Jonathan as acting-president, a cross section of political opponents and civil society groups have been expecting a storm in Bayelsa politics, which would sweep away Governor Timipre Sylva.

Their expectations are not far-fetched. A section of Bayelsa political elite, including key loyalists of Jonathan have been locked in a bitter battle with Sylva on the state of affairs in the state and in the Peoples Democratic Party (PDP).

Not only that, the media despite several denials continue to link Sylva's name to a grand plan to initially sabotage the emergence of Jonathan as acting-president. This coupled with the sudden frosty relationship between Mrs. Patience Jonathan and Sylva and the resignation of her ally in his cabinet, Commissioner for Information, Orientation and Strategy, Chief Asara A. Asara, made many to conclude that his days at the Bayelsa State Government House were numbered.

The visit of some lawmakers led by the Speaker, Rt. Hon Werinpre Seibarugu to Abuja was enough reason for conclusion to be drawn of impeachment plans in Bayelsa fuelling serious opposition against the lawmakers with a perfected plot to attack some targeted lawmakers.

Though Seibarugu has dismissed all stories about impeachment as false, the ugly situation has once again revealed the underbelly of Bayelsa politics, where contending forces battling for the soul of the oil-rich state would go to any extent to plunge the state yearning for development into crisis.

The build up
After the pronouncement by the National Assembly confirming Jonathan as the acting-president, politicians from Bayelsa started re-grouping in Abuja ostensibly to felicitate with the acting-President. Most of the politicians who argued that Sylva has alienated them from the governance of the state saw the elevation of Jonathan as an opportunity to seek re-alignment of forces to wrest control of power from Sylva.

The forces were able to penetrate Mrs. Patience Jonathan who hitherto was a staunch supporter of the Sylva administration and convinced her that the governor was part of the anti-Jonathan forces as he voted funds into the campaign.

According to sources, Seibarugu oblivious of what was at play was part of the delegation of the state government that went to the Akinola Aguda residence of the acting-president where Mrs. Jonathan leveled the allegations against Sylva that he joined forces with other politicians to frustrate the emergence of her husband as acting-president.

Reliable sources said Seibarugu was taken aback with the accusations that he later took it up with Sylva who denied ever being part of the anti- Jonathan campaign. In furtherance of her frosty relationship with Sylva, Mrs. Jonathan who frequents Bayelsa before now declined to attend the Ijaw day celebrations hosted by the Bayelsa state government and to rub it in, she did not send Mrs. Sylva to represent her but the wife of the Delta state governor.

Few days after the Abuja episode, Chief Asara, a cousin of Jonathan and close confidant of Mrs. Jonathan resigned his appointment from the Sylva government in controversial circumstances indicating a gang-up against Sylva.

Lawmakers as marked men
Some overzealous supporters of Sylva led by a top government official who is spearheading the campaign for his second term ticket got wind of the visit of the lawmakers to Abuja and concluded that they have switched camps. Sources disclosed to Sunday Sun that it was the government official that started rumours about impeachment and mobilized people to deal with the lawmakers.

According to an impeccable source, the group had perfected plans to sponsor some women who would march nude to the Bayelsa state House of Assembly complex and protest the action against Seibarugu and the lawmakers.

Sunday Sun learnt that Seibarugu and other members of the House who went to Abuja felt bad about the development, but they were able to overcome it as another group of Sylva loyalists which most of lawmakers are members also concluded plans to tame the particular government official vowing to teach him a lesson.

A source privy to the plan to nip in the bud any protest against Seibarugu told Sunday Sun that allegations against the House was misplaced as the lawmakers have stood by Sylva throughout his battle with the Abuja forces.

'It is unfortunate that the Speaker could be accused of plotting against Sylva simply because he was in Abuja to felicitate with Jonathan on his elevation. It is sad because it was this same Seibarugu when he was acting-governor that resisted every move by Abuja based politicians to persuade him to rock the boat to crash Sylva's political ambition'

Impeachment hoax
Few days to the resumed sitting of the House, news filtered out that, the Mace, the House's symbol of authority has been allegedly stolen by Seibarugu. On the morning of the sitting, the Speaker held a meeting with the lawmakers before they filed out to the Chambers. One after the other, 19 lawmakers filed in to the chambers and took their seats.

The Speaker to finally clear doubts about any impeachment explained that some people have been peddling stories about a purported impeachment. He expressed sadness that based on the false story, some lawmakers have been marked for attack over the issue. Seibarugu reiterated the unity of the House warning that those who want to foment trouble should look elsewhere as the House is focused on performing its legislative functions.

He said: 'The rumour is all over the place that the lawmakers are planning to remove the governor and the Speaker. I wonder where these set of people are picking their information from. These sets of people are not helping the state. As far as we are concerned, this is a united Assembly and today's sitting attendance is a testimony to the fact that we are a formidable team.

'We are here to perform our constitutional duty, which is to make law that will better the lots of our people. The media should always get their facts right and guide against any report capable of causing crisis in the state.

The House is not involved in any impeachment plot. We should manage our information well. We are innocent. Nobody should see the rumour as an avenue to attack Honorouable members on the road.

If the agents of falsehood want to carry their rumour, let them look elsewhere not the Assembly'.

Corroborating the Speaker, Hon. Alfred Egba representing Yenagoa constituency 1 and House Committee Chairman on Finance and Appropriation said the House is in tandem with Sylva on his vision of development of the state and has never considered any impeachment against him because he has not committed any crime.

His words: 'The Bayelsa state House of Assembly as a House has never considered serving an impeachment notice in on the governor. In the first place, there is no problem between the executive and the legislature that could create room for this suspicion.

As the stories making rounds on the streets so also are we hearing it. If the House is in crisis, it is the state that is in crisis and everybody would know. But thank God the governor is going about his normal duties and the lawmakers are also carrying out their legislative functions. There is no iota of truth in the whole story.

This is the handiwork of detractors, people who don't see anything good about governance and those holding public offices. The rumour is coming from these set of people. No right thinking Bayelsan would put the state in a round of crisis'.

Egba disclosed that members of the House have developed thick skin over false stories to pitch them against one another noting that, 'there are people waiting for crisis so that they can benefit with the new political arrangement'. He advised Bayelsans to come together to speak with one voice as the state government is poised to transform 'the Glory of all lands'.