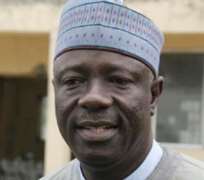 
President of the Nigeria Olympic Committee, NOC, Engr. Sani M. Ndanusa has congratulated the Nigeria Football Federation, the Super Eagles and indeed Nigerians for being the first African country to hoist its flag in Brazil for the World Cup next year.

The Super Eagles shot the Walya Antelope's of Ethiopia twice on Saturday in Calabar to become the first African country to berth in Brazil and followed by Cote d Ivoire and Cameroun.

I congratulate President Goodluck Ebele Jonathan, whose tenure has brought about a turn-around of our sports. I congratulate the Minister, Mallam Bolaji Abudullahi and the President of NFF, Alhaji Sani Maigari for the cocktail of good fortunes for Nigerian football'', Ndanusa said.

The President of the NOC also showered encomiums on Coach Stephen Keshi for being the second Nigerian to qualify Nigeria for the world cup after Amodu Shuaibu in 2002(Keshi was Amodu's assistant). ''I plead that the NFF allows Keshi to lead the Eagles to Brazil and for Keshi to also fortify his team as the opposition at the world stage would be enormous''.

He also tasked the NFF and the Super Eagles to go beyond the quarter final stage that has become the cross bar of African countries in the World Cup while pledging that Team Nigeria would excel at the forth-coming Glasgow Commonwealth Games.