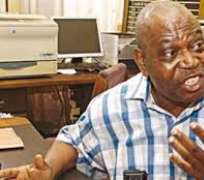 
A renowned academic and former President of the Academic Staff Union of Universities (ASUU), Professor Festus Iyayi, has been  killed in a fatal car crash.

The  accident occurred on Tuesday morning around Lokoja, Kogi State, as he made his way from Benin to Kano to attend a meeting of the National Executive Council (NEC) of ASUU where the union is expected to call off its four month old strike.

The accident involved a vehicle in the convoy of Governor of the State Governor, Idris Wada.

In December 2012, Governor Wada's convoy was also involved in an accident that resulted in the death of the governor's aide de camp before he arrived at the National Hospital, Abuja for medical attention.

Iyayi was among leaders of the union that met with th President Goodluck Jonathan in Abuja last week to discuss the strike and evaluate possibilities for ending it. He was aged 66.

Deputy Governor of Kogi State, Yomi Awoniyi confirmed that the governor's convoy was involved in an accident, but remained reticent on details, saying he was out of the state.

Iyayi, born in south-southern Edo State to a modest family, began his education at Annuciation Catholic College in the old Bendel State (popularly known as ACC), graduating in 1966.

In 1967, he attended Government College Ughelli, graduating in 1968. In that same year, he was zonal winner in a Kennedy Essay Competition organised by the United States Embassy in Nigeria.

He travelled overseas for his higher education, obtaining an M.Sc in Industrial Economics at the Kiev Institute of Economics, in the former USSR and then his Ph.D. at the University of Bradford, England. In 1980, he returned to Benin as a lecturer in the Department of Business Administration, University of Benin.

As a member of staff of the University, he became interested in radical social issues; and a few years after his employment, he was elected Chairman of the local branch of the Academic Staff Union of Universities (ASUU).

He rose to the position of National President of ASUU in 1986; but in 1988, the union was briefly banned by General Ibrahim Babangida, then military head; and Iyayi was detained. That same year, he won the Commonwealth Prize for Literature for his book Heroes.

Iyayi was later elected President of the Committee for the Defence of Human rights (CDHR).

President  Goodluck Jonathan on Tuesday condoled with the leadership and members of ASUU on the tragic death, extending condolences to Iyayi's family, colleagues, friends and associates across the country and beyond.

In a message signed by Special Adviser to the President on Media and Publicity, Dr. Reuben Abati, the president described Iyayi as a renowned academic and award-winning writer who rose to national prominence in the 1980s with his courageous leadership of ASUU in its struggle for a better working environment for teachers and academics in the nation's university system.

'The president joins them in mourning the renowned academic and award-winning writer who rose to national prominence in the 1980s with his courageous leadership of ASUU in its struggle for a better working environment for teachers and academics in the nation's university system', a part of the statement read.

'He is particularly dismayed by the fact that Prof. Iyayi has sadly lost his life while going to contribute to efforts to finally resolve the current ASUU strike which has unfortunately disrupted academics in most of the nation's universities for over four months.'

President Jonathan prayed that God Almighty 'will comfort all who mourn Professor Iyayi and grant his soul eternal rest.'