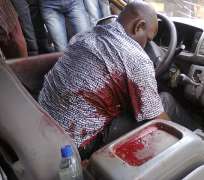 I witness from Coal City, Enugu this afternoon says cold-blooded, dare-devil robbers have shot two persons dead while injuring two others with bullet shots in the leg. The dead were an MTN driver whole distributes or sells MTN recharge cards to its customers and a tricycle (also known as Keke) driver.

The robbers according to the I witness who would not want his name mentioned, said the MTN driver was intercept close to Mbanugo Bus Stop by the robbers, after which they opened a close range shooting at the driver which resulted in the driver's death and undisclosed amount of money and unsold MTN recharge cards were made away with.

The Keke driver was not lucky as he stopped and started running but was hit in the head by the armed robber's bullet. Though the name of the MTN driver has not yet been revealed, the Keke driver was simply identified as Praise.

The other two victims, who were said to have been shot in the leg, have been rushed to hospital.

The robbers numbering four carried the operation in a yellow taxi car.