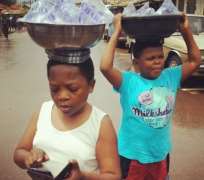 Some few weeks back, a story broke on numerous Ghanaian and Nigerian entertainment sites and blogs regarding Nigerian Actor Chinedu Ikedieze, fondly known as Paw-Paw.

In the said story, Paw-Paw who came to Ghana to shoot a movie with one of Ghana's local language (Twi) movie industry (Kumawood) producers known as Peace and Love Production – in Kumasi was alleged to have been stopped from shooting a movie due to the fact that he Paw-Paw, doesn't have a working permit.
According to the story, the executives of the Film Producers Association of Ghana, FIPAG, invaded the movie set and instructed the producer of the movie to halt production because, Paw-Paw, a foreigner, does not have a working permit to guarantee his legitimacy of working in Ghana.

The alleged story actually came in at a time FIPAG had not long ago (fortnight ago), issued a directive to Ghanaian film producers in Ghana (whether registered with FIPAG or not), to secure a working permit from the Ghana Immigration Service authorities and FIPAG furnished with a copy of the permit letter; any time they bring in a foreigner to shoot a movie here in Ghana.

This is because, FIPAG has signed an MOU with Nigerian film producers, admonishing producers in each member states to always secure working permits for its indigenes (actors/actresses) in order to be able to know which actor or actress is in who's country, and to also seek their (actors/actresses) welfare respectively.

NigeriaFilms.Com Correspondent In Ghana (Mustapha Ayinde Inusah) took it upon him-self to visit Paw-Paw and the producer of the said movie in Nkawkaw – the movie set, in the Eastern region of Ghana. In a chat with the executive producer, Daniel K Sarfo Tyson, he told us that, no one has come to the set to stop Paw-paw from shooting.

He revealed further that, he rather had calls from some executives of FIPAG; asking him to oblige to FIPAG's recent procedures for contracting foreign actors to work in Ghana, which he agreed to.

Paw-paw also made it known to the reporter (Mustapha Ayinde InusahAKA Attractive) that he's peacefully enjoying his stay in Ghana and expecting to finish shoot by the close of today – 7th November, 2013.

In a separate chat with Michael Ola, the PRO of FIPAG, who as alleged to be the one who sent the press release to the media with the headline: 'Nollywood Actor, Paw-Paw banned from shooting a movie in Ghana,' he stated that ,the media twisted and exaggerated the press release he sent to them.
Keep reading Nollywoodgists.com because you can always trust us of going the extra mile which the rest won't go in bringing you the exclusivity in the news you long to read and be informed about.