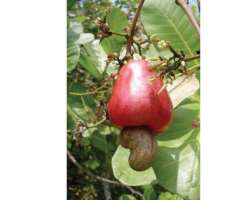 By Ayodamola Owoseye
March 5, 2010 12:32AM
A little education will impact positively on how much these cashew nuts will be sold at the international market. Photo:COURTESY OF SLOG.THE STRANGER.COM

The lack of training for farmers has been identified as a major challenge in the development and effective maximisation of the potential of the agricultural sector, which can help eradicate poverty and generate more investment opportunities for the country.

Speaking yesterday in Ibadan, Oyo State, the president, Nigerian Cashew Association of Nigeria, Tunde Owoeye, said lack of commitment by successive governments to training farmers on new planting skills are major setbacks in the development of the sector.

Mr. Owoeye, who spoke during the Nigerian Cashew Week organised by the African Cashew Alliance in collaboration with the United States Agency for International Development, said, 'Cashew has been a major cash crop in Nigeria, but the development and tapping of the resource for processing and export to generate more revenue for the country has suffered a large set back due to government's neglect of agriculture.'

He said the development has affected cashew yield because most of the trees harvested by the farmers are old and outdated with many over 30 years, adding that the quality has also dropped when compared to those from neighbouring countries, thereby making Nigerian cashew uncompetitive in the international market.

Awareness creation
The managing director of the African Cashew Alliance, Christian Dahm, said with the strong and growing domestic and international market for cashew, the industry can generate more than $25million in added value per year by processing the raw cashew nuts alone aside many other thousand new jobs and businesses which will spring up in the process.

'If 90 per cent of the of the Nigerian crop is processed, it will create more income for the country as there is a huge market potential for processed cashew nuts as well as develop the agricultural sector and other businesses, which will also develop around this and this will create a stable market for the farmers,' he added.

An official from the Nigerian Export Promotion Council (NEPC), William Ezeagu, who represented the executive director, David Adulugba, called for the development of the cashew sector to boost export trade opportunities for the country.

'There is an urgent need to develop and promote the cashew sector for export promotion as a means of generating more investment opportunities in the country as well as increasing the amount being generated on export trade through agricultural commodities in the country.

'The agency has been encouraging the promotion and export of the produce in the last two years by getting the traders and operators come together to discuss promoting the export of cashew which is one of the major export crop which is been left to waste.

'The lack of awareness on the value of the produce to the country puts it at the receiving end of farmers at both the harvesting and processing stages. Also the low yield of the crop makes the price low compared to other neighbouring countries in Africa.'

Challenges of the industry
Mr. Owoeye noted that although there are numerous challenges facing the sector, training of farmers is the most important one which needs to be tackled.

'Without a proper knowledge of the handling of the pre and post harvesting of the crop, there will always be a problem of low quality yield and this will keep affecting the market as without the farmers there is no market.

'Government and other agencies in charge need to come together to provide new cashew varieties at affordable prices to farmers to increase their yield and the whole industry,' he added.

Ranjeet Pradeep, an official with Olam Nigeria Limited, a cashew processing factory in Nigeria, said it is slightly upsetting that a country that produces almost 10 per cent of the cashew crop in the world is nowhere to be found on the chart when it comes to exporting the processed produce.

Mr. Pradeep cited lack of infrastructure such as unstable power supply as one of the major high cost component for manufacturing in the country.

Government support
The Commissioner for Commerce and Cooperatives, Oyo State, Kola Balogun, recalled that the state government, in recognition of the importance of cashew as a cash crop, established a cashew processing plant in 1992 with hectares of plantation to boost production.

'At full capacity, the company was producing three tonnes of cashew nuts in two shifts per day but it stopped working and went obsolete due to the inability of the government to procure relevant spare parts for the running of the factories,' he revealed.

However, he said the present administration is determined to resuscitate the factory, and is now on the lookout for strategic partnership with interested members of the private sector.