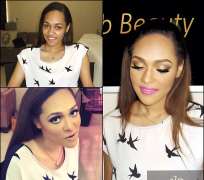 The girlfriend of pop star, Wizkid, Tania Omotayo has escaped death after she was involved in a car accident in Lagos.

Tania disclosed her near-death experience on twitter a while ago. She said that the car crash occurred on the Third Mainland Bridge. Tania also stated that she could have died in the road accident, but for God.

The car was reportedly speeding when one of its tyres bursts. Tania wrote, "thank God for my life, the tyre of the car [I was in] burst on TMB, we could have easily swerved off the bridge," which could have been deadly.