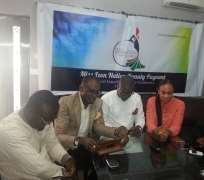 The popular notion that the Ijaw people and other Niger Delta ethnic groups are mainly militants has been vehemently debunked on Tuesday as a group under the auspices of Izon People's Forum (IPF) formally unveiled the first ever Ijaw Beauty Pageant (Miss Ijaw) to be held in Bayelsa state, the Ancestral home of the Ijaw people.

The disclosure came in a press conference held in Abuja, Friday at the Sheraton Hotels and Towers, Abuja. Speaking with some journalists, a member, Tonye Idaminabo who presented a lecture on the Izon people and their culture, said that the project was borne out of the desire of well meaning ijaw indigenes, both at home and in the Diaspora iato promote Ijaw cultural values and ethics. He said that the Ijaw people were generally identified as the 4th largest ethnic nations in Nigeria, and of course the most prominent ethnic group in the Niger Delta region.

Adding, he said that the Ijaw people were scattered across various states in the country and contributing richly to the development of those states, debunking the viral notion that they were mainly militants. He said, ''this beauty pageant, apart from harnessing and projecting the rich ijaw culture, will identify with all people of Ijaw origin, irrespective of where they live.

It will project the Ijaws as people who have rich ethical values, contrary to the wide held notion that we love militancy. We have got very rich culture which I believe has been debased over the years in the guise of militancy. We have resolved to take our heritage above every other negative notion. We want to tell the world that we are a peace loving nation, and capable of attracting investors to the rich Ijaw territories, known for their revered terrorism potentials,'' he said.

Also speaking at the unveiling ceremony, Ambassador David James Egwu, Director of Projects and operations had affirmed that the Izon nation beauty pageant was a new platform that will not only showcase the rich cultural heritage of the Ijaw people, but to pass a message of peace, love and harmony that link the Izon nation to other ethnic groups in the country.

He said that the beauty pageant which will follow a special procedure will begin with pre-event lecture, marking the home coming of prominent Ijaw icons who would be briefed on the symbiotic relationship between the pageant and the culture of the Ijaw nation.

It was disclosed that His Excellency, Siriake Dickson is expected to host other prominent Ijaw icons at the event to include the mother of the Ijaw nation, Patience Jonathan and his Excellency, Preside]#nt Goodluck Ebelle Jonathan.

After the pre-event lecture, the contestants shall embark on a tour of major tourist sites in Ijaw land. It was further disclosed that different editions shall be dedicated to prominent historical figures of the Izon nation.

At the unveiling ceremony were other key officials of the project, Ambassador Utchey Odims, Director, Marketing and Communication, Dorothy Njemanze, Nicky Nwadinobi and a host of others.