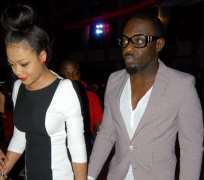 Recently, there have been media reports that star actor, Jim Iyke, who was recently alleged to have impregnated a lady, though the lady has reportedly made a U-turn on the matter, and another star actor, Nadia Buari were dating. But Jim has now debunked marriage tale trailing him and Nadia.

The two stars have been reported to be dating each other and were said to be planning of marriage, after Jim was recently alleged to have been delivered of an evil spirit which had prevented him from getting married.

Reacting to the widely reported marriage rumour between him and Nadia, Jim disclosed that he's not planning of legalising his affair with Nadia.

He wrote, “I'll resolve this issue by stating as clearly as possible that this marriage rumours is unfounded and far-fetched. My prerogative is known to me only.”

Some critics have insisted that Jim and Nadia are only trying to make publicity stunt out of their rumoured love affair.

Meanwhile, Nadia Buari has reportedly deleted Jim Iyke's pictures from her Instagram page. This, according to what we gathered, was because of Jim Iyke's stand on their affair.