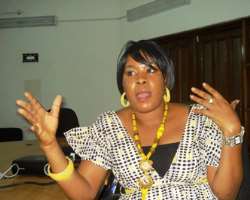 KETACHUKWU Teena Iroegbu has a humble background. At 13, she lost both parents. This compelled her to muster rare courage that saw her through the trying challenges of life. Today, she is a Communications consultant, working in the Nigerian entertainment industry and beyond. From the Nigerian Music Awards, which she managed for three years to BBC World Service and development communication in rural areas, she has garnered rich experiences that put her in position to mentor young girls to lead good lives. In this interview with ABOSEDE MUSARI, she talks on the entertainment industry and her passion to rehabilitate girls, who have been forced into prostitution.

Background: I am a communication consultant. I've been doing this for eight years. I studied Theatre Arts and Mass Communication as a combined course at the University of Ibadan. I write scripts and also serve as a consultant for the BBC World Service. Mostly, I work with NGOs to develop communication strategies, especially, when it has to do with development communication in rural areas. I run an outfit called CultureAfrik, and we handle all aspects of theatre, dance, choreography, stage productions and the like.

Past jobs: We have managed the Nigerian Music Awards in the past three years. We handled the entertainment and logistics. We've been working with BBC on World Service Trust. We've worked with Society for Family Health and FCDA.

Assessment of Nigerian music industry: The industry has evolved into something great compared to the past, when it was Fela, Sonny Okosuns and a few others. Now, the game has really stepped up and, so far so good, I'm proud to be a Nigerian, when it comes to music. Right now, the artistes are competing favourably in the international scene and they are making us proud.

What about dance? Entertainment generally in Nigeria used to be relegated to the background. It was not something people were proud of, just like football. Once upon a time, football was nothing to be reckoned with. Parents used to beat their children, when they went to play football. But now, every family wants to have a footballer among them. The same way, entertainment is going through a stage, it is still evolving and would surely get there.

Which artistes do you work with? At the last music awards, we worked with Mama Gee, Kween and Djinee. We have worked with Sunny Neji, P-Square, and a number of others.

Your experiences with Nigerian artistes: Many people believe they are saucy because they are stars, however, with me it hasn't been that way. Maybe it's the way people relate with them. People have always said Mama Gee is a difficult person. She tried to show it when I met her, but I think what helped me is that we both studied Theatre Arts and there is a kind of discipline we were taught. I was the director and we were taught that the director's word is final. She had to comply with my instructions. We turned out to be good friends and worked as a team. Another person I enjoy working with is Sunny Neji; he is a levelheaded person. He keeps to time, does his job and leaves. I don't think, I have had any bad moment with any artiste I have worked with.

Your passion? I am very passionate about the things I do. I have had an independent mind since my early years because I lost both parents at 13 and had four younger ones to take care of. That helped me to develop much faster. I stopped being a child at 13 because I had to be responsible for my siblings. That made me to understand that I had to work extra hard. I had to be creative. I had to start thinking of what I could do to make money. I went into dancing and I was paid for it. I did writing and acting. I washed clothes for people to make extra money. A lot of people in that situation ended as prostitutes, but God's grace kept me. I have a project to help prostitutes to come out of the situation. In 2007, I interviewed 750 prostitutes in Abuja. I spoke with them one on one. I wanted to know why they were into that kind of business and because of that encounter, many of them made plans to leave the trade.

How far have you gone with that project? I did that research with sponsorship from World Bank through FCT Action Committee on AIDS (FACA). They gave me some money and I employed people that joined me to carry out the research. More than 60 of them were ready to quit and to start a trade, but at that point, the World Bank withdrew the funds and we couldn't continue.
It was a tough time for me; the girls were calling me because they saw me as someone, who had come to help them. There were so many girls and it would cost about N350, 000 to set each of them up in business. This is because one has to take them out of those slums, to give them descent accommodation to make them change. Then, you pay for them to learn trades. When they finish, you have to arm them with equipment to start business. If you bring them out of prostitution without giving them a decent means of livelihood, they will go back to it. Unfortunately, most of them have gone back because there was no fund to help them through.

Were any of them able to survive on their own? About two of them said they were going back to their hometowns. We interviewed a girl that used to pay men to sleep with her, just for the fun of it. We found out that some were into prostitution because of greed; they wanted to have more than their parents could afford. For others, they were pushed into it by problems. However, the message is that no problem should be enough to drag one into such trade. This was the reason we wanted to help them.

Would you still go on with the project if you find a sponsor? I have gone back to the project already. I am in the process of registering it as an NGO, so that I can get help. I have got an office. I have personally started going back to some of those places, where I met those girls. It is my project and I am going head-on. I believe that with time people will assist me. Right now, I am putting in the little money I have into it. This issue gives me sleepless nights. I have decided not to wait for the big organisation to give me money to start. I have located places around the satellite towns where I can meet them. I met one that was 13 years old. The need for money for family upkeep drove her into prostitution at that young age.

Your programmes for 2010? We want to go into TV production, producing soap operas, films, reality TV and talk shows. We've been doing events and theatre, but now we want to go into productions. Also, I want to organise workshops for young women because of my passion for them. People don't see women as people that can come up with good business ideas. When a young woman goes into an office to discuss business, instead of listening to what she has to say, the man is busy looking at her body and what she could offer in kind. I am going to have workshops to teach women on how to avoid these things.

Story by The Guardian Life magazine