Garba fires back at Iran coach over age-cheating claim 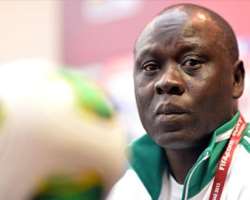 He fired back at the coach who had insinuated that Nigeria fielded over-age players in the ongoing under 17 world cup.

After watching his team hammered 4-1 by the Eaglets in Tuesday's Round of 16 clash at the Khalifa Bin Zayed Stadium in Al Ain, Coach Ali made a damning remark on Nigeria's U17 team that they are over-age, a remark the Eaglets coach has not taken lightly.

'All the players we have here passed the MRI test and we even conducted another round one month before we came here and we would probably take on the Iranian coach on this'', Manu stated in replying the allegation levelled against his team.

While the Iranian coach is making his age-cheating claims, the current Golden Eaglets technical crew has been commended back home for doing a good job of selecting a true U17 team that has so far represented Nigeria so well at the ongoing Cadet Mundial.

Meanwhile, Garba has stated that he has no reason to change his tried and tested coaching style which has seen his team make it to the quarter finals of the ongoing FIFA U17 World Cup in the United Arab Emirates.

Manu who at the commencement of the cadet Mundial stated that his football philosophy is fashioned around the playing style of passing teams like Barcelona added that the best form of defence is to attack in the flash interview immediately after the Iran match.

''I always want my team to attack and I would always improvise because this is a team where anybody can score,'' he stated.

The Eaglets gaffer said he rated the players eighty percent for being able to score four goals in a match 'of this magnitude' which is a knockout stage of a World Cup and even hopes they continue in that light till the end of the competition.