Why economic growth is slow – Jonathan 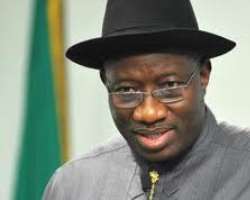 
President Goodluck Jonathan has blamed the slow economic growth in Nigeria on the numerous crises that trailed his administration since 2011.

He said that no nation could witness economic stability or internal democracy in an atmosphere of social unrest, saying that economic growth, development and stability were tied to political stability.

Jonathan spoke on Wednesday when  he was bestowed with  the 2013 Africa Peace Award from the United Religions Initiatives (URI), at the Presidential Villa, Abuja.

''This award is dedicated to my people and my country, Nigeria. We couldn’t have been qualified for this award if my people did not encourage me.' He said.

''We would continue to do our best. For me as an individual, I will continue to play my role in spite of the challenges.

Presenting the award to President Jonathan, the Regional Director of URI, Ambassador Mussie Hailu, said the award was in recognition of the President’s immense contributions to religious harmony in Nigeria and peace keeping efforts across the world.

He said the award, which is non- monetary, is meant to honour people who have distinguished themselves and exhibited exceptional leadership qualities.