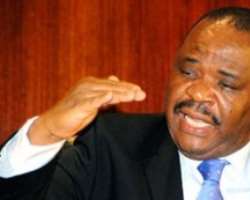 
The Senate Committee on Subsidy Re-investment and Empowerment Programme (SURE-P) on Wednesday  threatened to use every available legal instrument against the Minister of Works, Mister Mike Onolememen for failing to appear before it.

The committee had invited the minister to appear before it to explain how the ministry spent the sum of about 30 billion Naira SURE-P funds from 2012 to 2013.

The Chairman of the panel, Senator Abdul Ningi, at the meeting regretted that despite the invitation letter to the minister which was duly acknowledged, he refused to appear before the committee.

According to him, 'A minister of this government cannot refuse to appear before any committee of the National Assembly, talk less of a senate committee that is saddled with the responsibility of unfolding a programme that is not clearly defined to Nigerians'

He said what the minister and his team did amounted to crass lawlessness, adding that President Goodluck Jonathan had appointed wrong people into public offices.

According to him, neither the minister, the Minister of State, Alhaji Bashir Yuguda, nor the ministry's Permanent Secretary showed up, after keeping members of the committee waiting for more than one and a half hours, and without any reason for their failure to turn up.

'A huge amount of money, totalling over N30 billion, was allocated to the Ministry of Works under the SURE-P. We accordingly invited the minister to render an account of the activities of his ministry under the SURE-P from 2012 to 2013.

'Today (Wednesday), we sat from 2.00p.m. till about 3.30p.m., waiting to hear from them. But neither the minister, his Minister of State nor the Permanent Secretary showed up till now.

'We sent a letter to them on October 22 which they acknowledged on October 23. This showed that they are aware of today's meeting.

'The president has appointed the wrong people into public offices. We take strong exception to any minister who thinks he or she is above the law. What they did was a display of crass lawlessness.

'The job of this committee, by inviting the ministers, was for them to render an account of their activities and also state their difficulties.

'We take strong exception to any minister who thinks he is above the law. We are going to use every available legal instrument against them.

'This is the last time this committee will condone such an act from any minister who fails to honour our invitation without any genuine reason.

'By failing to appear, they are trying to shroud their activities in secrecy. We may not appropriate fund to the SURE-P any longer because of these people.

'It is no longer business as usual. People must be accountable for their actions', he said.

Senator Ningi, however, said there will be another invitation to the Minister of Works and his team, in accordance with the scheduled programme of the Senate Ad Hoc Committee on SURE-