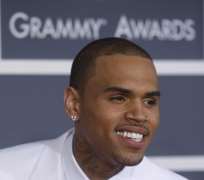 
Police said they arrested pop music star Chris Brown early Sunday and charged him with felony assault after a violent altercation outside a downtown Washington hotel.

Police spokesman Anthony Clay told AFP that Brown was arrested 'around 4:25 this morning (0825 GMT) in front of the W Hotel,' a chic establishment near the White House.

Brown, along with a male companion, got into an altercation with a third man, and the incident became violent, according to police.

Brown, 24, and his companion 'were arrested and charged with a felony assault. A victim was taken to the hospital and treated for his injuries,' the police spokesman said, adding that the beating victim 'had injuries to his face.'

'They are still in our custody,' Clay said of the pop star and his friend, who was described by US media as the singer's bodyguard.

Brown is the ex-boyfriend of pop singer Rihanna, with whom he has had a tempestuous on-again, off-again relationship.

He was arrested in February 2009 after getting involved in a physical confrontation with Rihanna that left her with a bruised and battered face.

He was required, after pleading guilty in court to the assault, to take part in domestic violence counseling and sentenced to five years' probation and community service.