OSHIOMHOLE VS ANENIH: THE FINAL BATTLE 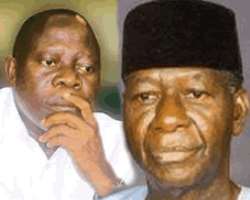 Oshiomhole vs Anenih: The final battle
By NDUBUISI ORJI
Friday, March 05, 2010
These are intriguing times in Edo. The state has been on tenterhooks since last Monday when the House of Assembly broke into two along party lines following the removal of the Speaker, Hon Zakawanu Garuba and his deputy Levis Aigbogun on February 22.

What was designed to be a normal sitting of the House on that day after a three weeks recess snowballed into a free for all between Action Congress(AC) and Peoples Democratic Party(PDP) legislators. The crisis was unprecedented in the current Assembly where sources said members had worked harmoniously irrespective of their parties.

It would be noted that at the inauguration of the current Assembly, PDP had 16 members against AC's eight. Consequently, PDP naturally produced the Speaker, Deputy Speaker and the Majority Leader. But over time, through the instrumentality of Appeal Court judgment and two bye- elections, the PDP lost four seats to the AC bringing their number at par with the PDP.

Bouyed by the equality of their members with that of the PDP and the defection of the PDP member representing Esan West Constituency Bright Omokhodion, into its fold, the AC moved to change the House leadership that fateful day. Sensing trouble, Garuba quickly adjourned the sitting sine die. After the fight in the hallowed chamber of the House, the 13 AC legislators reconvened and suspended Garuba, his Deputy and Okiye from the House and elected Hon Peter Aliu, Estako East as Speaker pro-tempore. The AC 13 were to later elect Omokhodion and its Minority Leader, Paul Ohanbamu and Philip Sahaibu (Estako West 2) as Speaker, Deputy Speaker and Majority Leader respectively. This was after they had secured a court injunction to restrain Garuba and Aigbogun from parading themselves as Speaker and Deputy respectively.

But the 11 PDP legislators would have none of that. They insist that Garuba remains the Speaker. To them, the AC did not have the required two-thirds majority to change the House leadership.

Today, the state has two Speakers. Garuba, who regards his impeachment as a nullity and Hon Bright Omokhodion, who was elected by the 13 Action Congress (AC) 40 hours after the crisis started. Garuba said he had adjourned the House sine die, and that he is the only person that would reconvene the House. Consequently, he said whatever the AC legislators are doing is illegal.

However, Omokhodion has assumed control of the House, and the state government has already recognised him. For a start, he has cleared three commissioner-nominees presented to the House by the governor, and passed the controversial State Universal Basic Education Board (SUBEB).

The Assembly crisis is unprecedented. This is the first time an impeachment attempt is snowballing into a parallel leadership in the House. Since 1999 when the present political dispensation started, three Speakers had been removed. First it was Hon Thomas Okosun. Then, Friday Itulah and David Iyoha. What then is responsible for current impasse.

The controversy
The controversy on the state of affairs in the House is whether or not Garuba was validly removed or not. The PDP continues to insist that the AC legislators did not have the 16 members, which is the two-thirds majority of the House, required to effect a leadership change while the state government and the AC say the change of leadership in the House stands.

The PDP leader in the House, Hon Frank Okiye, told Daily Sun that the AC legislators never had the constitutionally prescribed two-thirds majority to effect a leadership change in the House. Besides, he said there was no petition against Garuba and his Deputy, and that the mace used by the 13 AC legislators to elect a speaker pro-tempore was borrowed from the nearby Oredo Local Government Council.

' The House is still intact. All they are doing is scrambling for survival. What gives legitimacy is two-thirds majority. They don't even have a petiton. Why didn't they flash the petition. Usually before there is an impeachment, there is usually a petition, that is available to everybody. Even you, I am sure you have not seen the petition,' he stated.

The lawmaker who said the root cause of the House crisis ' is greed for power and disrespect for the rule of law' accused the Governor, Comrade Adams Oshiomhole of fanning the embers of discord in the House. Specifically, Okiye said key government officials were present in the House the day the crisis started.

'You can see the hands, the head and face of the Edo State governor. The SSG led the police team. The Chief of Staff led the thugs. EDSG vehicles were used in carrying thugs to the House that day. Edo State government was visible on that day. When you watch the clip you see the special adviser to the governor on legislative matters supervising the kangaroo sitting.

'We were told that they went to Oredo to borrow a mace. The Clerk said he was made to swear in the Speaker pro-tempore under duress,' he added. But the Parliamentary Liaison Officer to the governor, Hon Omon Ezomon, disagrees. He told Daily Sun that he is aware that the AC legislators got 16 signatures in the petition to remove Garuba. Consequently, the action stands. His words: 'Having gotten two-thirds majority, their action is legitimate. 16 signatures were gotten to remove the Speaker . He has been impeached. He has been impeached. Democracy is a game of numbers'.

However, he said if the PDP caucus is not satisfied with the action of their AC counterparts , they should go to court. Ezomon, who was a deputy speaker of the House denied that the governor has a hand in the crisis. He said that the SSG, Mr Pally Iriase, was nowhere near the Assembly when the crisis erupted in the House. As for the Chief of Staff, Mr Osarodion Ogie, Ezomon said he merely went there to watch the drama like any other citizen of the state.

' They are trying to find a scapegoat for their wahala. The SSG was not even within the vicinity. The Chief of Staff heard what was happening, and went there to see like every other person

'My advice to Zakawanu is to accept what has happened in good faith .I don't think there is any problem. The former speaker should allow peace to reign,' the former Deputy Speaker stated.

Oshiomhole's past battles with the Assembly
The relationship between the governor and the House has been that of cat and mouse. Not a few believe that the unfolding drama in the Assembly is a fall-out of that frosty relationship. The first friction between Oshiomhole and the House was about the legality of the actions performed by former Governor Osunbor. The governor on assumption of office had held that every action taken by his predecesor was a nullity.

This is because, in his view, since the former senator was not validly elected, his actions as governor had no force in law. In that spirit, the governor had during a visit to the Edo City Transport Service (ECTS) ordered the sack of some of the workers employed by the Osunbor administration. Exasperated by the governor's action, the House summoned the Secretary to the State Government, Mr. Iriase to appear before it to explain the rationale behind the action of the government. At the end of the day, the House succeeded in getting the government to reverse itself on the sacked ECTS workers.

There was also the controversy of the 2009 budget. But the most protracted of the face-off between the Assembly and the Governor was over the refusal of the House to screen the latter's nominees into the SUBEB. The governor on assumption of office had sacked members of the board, who were appointed by the Osunbor administration. The House refused to clear the new nominees, on the ground that the sacked board members had gone to court to challenge their sack.

The Anenih/Oshiomhole angle
On the surface, the crisis in the House appears an ordinary face off between the PDP legislators and their counterparts in the opposition AC. But those in the know say the crisis is the final battle in the political supremacy tussle between Oshiohmole and the Chairman Nigeria Ports Authority, and PDP leader, Chief Anthony Anenih. The duo, it would be noted, have been at each other's jugular in the last couple of months over who is the authentic political leader in the state.

Oshiomhole at the flag-off of his campaign for the governorship in early 2007 at the Urhokpota Hall in Benin City vowed to tackle head-on the problem of godfatherism. Eliminating godfatherism in the state was a polite way of saying he would retire Anenih, who has playing a dominant role in the politics of the state from politics.

In the ensuing tussle, Oshiomhole has recorded one victory after another against the former minister of works. Apart from getting PDP leaders and about seven council bosses elected on the platform of the party in the state to defect to the AC, the governor had won two Assembly re-run election against the PDP in recent times. Consequently, analysts say the move by the AC legislators to take over the leadership of the House last Monday is to finally rout out Anenih from political reckoning in the state.

Other matters
Even if the removal of Garuba stands, one issue which the PDP may not allow to lie low is the issue of the defection of Omokhodion. Already, Garuba had declared his seat vacant before the crisis started. He said he acted in accordance with section 109(g) of the constitution.

Those in the know said the PDP is prepared to pursue the Omokhodion case to its logical conclusion.

Conclusion. Who then is the authentic Speaker ? Rt Hon Zakawanu Garuba or Hon Bright Omokhodion? Only time would tell.