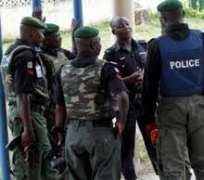 
The Special Frauds Unit of the Nigeria Police has taken into custody five bankers attached to a Sokoto State branch of Sterling Bank Plc for an alleged N146.7m fraud.

SFU spokesperson, Ngozi Isintume-Agu, named the bankers, who are said to be from the same branch, as Albert Nsude, 32; Danladi Garba, 38; Nasir Shehu, 40; Daniel Adeboye, 32 and Patrick Jimoh, 32.

The SFU said the ex-bank manager, Kayode Adeyanju, who is the primary suspect in the case, is currently at large.

The police alleged that Adeyanju conspired with the five suspects to defraud the bank of the sum of N146,782,980, by manipulating the Sokoto State Board of Internal Revenue account domiciled with the branch.

Isintume-Agu said in a statement on Friday, that the bank told police that the former bankers diverted the money to their personal coffers without the consent of the bank management.

She said, 'During investigation, the five suspects (apart from Adeyanju), were apprehended and they all admitted granting various illegal loans to some private companies and local government department through the instruction of the ex-bank manager, who is still at large.

'They all alleged that Adeyanju took the sum of N70m belonging to some depositors to treat an ailment and fled to London with his family.