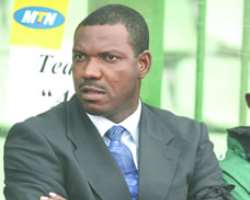 Lagerback accepts Eguavoen, Amokachi
By GEORGE ALUO
Friday, March 05, 2010
New Super Eagles' manager, Lars Lagerback, has accepted to work with the Nigerian duo of Austin Eguavoen and Dan Amokachi as he steps up preparations for the South Africa 2010 World Cup.

Chairman, technical committee of the nation's soccer governing body ,Nigeria Football Federation (NFF), Chief Taiwo Ogunjobi, who cleared the air yesterday, said Lagerback did not raise any objection on inclusion of Eguavoen and Amokachi in the technical crew.

'Lagerback has accepted to work with Eguavoen and Amokachi, but he will still have two other European assistants in line with the understanding we reached with him,' Ogunjobi said.

The NFF's bigwig said the nation's build up for the summer Mundial had started in earnest with the hiring of Lagerback.

He assured Nigerians that the Eagles will do well at the Mundial. On Shaibu Amodu, who was demoted after the Eagles' lackluster performance in Angola, Ogunjobi said the embattled coach is on leave, a situation which allowed his absence from the bench during Wednesday's friendly against DR Congo. Ogunjobi stressed that Amodu would, however, be back in time to take charge of proceedings when the Home-based Super Eagles face Niger in a CHAN 2011 Nations Cup championship later this month.

The Eagles are billed to host the Nigeriens at the Abuja National Stadium on the 26 of March with the return leg coming up in Niamey early next month.

It would be noted that Nigeria failed to qualify for the maiden edition of CHAN held last year in Cote dIvoire after losing to Ghana in the qualifiers.