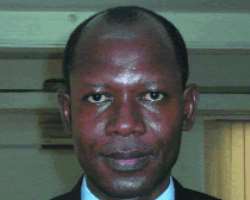 By KELECHI MGBOJI
Thursday, March 04, 2010
Davi Adonri
The managing director and chief executive officer, Lambeth Trust & Investment Company Limited, Mr. Davi Adonri is one of the few dealing members of the Nigerian Stock Exchange whose vast knowledge of operations of capital market is relevant to market development in the country.

The chartered broker whose wealth of experience cuts across investment banking and capital market operations since 1992 also holds a degree in Pharmacy from the University of Benin, Edo State. After several years of working with a couple of companies in managerial positions he set out to undertake professional qualifications in stockbrokerage culminating in associate membership of the Nigerian Stock Exchange as chartered stockbroker, having earlier bagged the authorised clerkship licence of the Exchange.

In an exclusive interview, he stated that it was time capital market regulators deliberately promoted the financing of productive real sector of the economy. He said that over the years, capital formation through the Nigerian capital market had largely favoured the services sector of the economy to the detriment of the real productive sector which is why analysts believe that the market is yet to link its role to the larger economy.

According to him, the new director general of Securities and Exchange Commission (SEC), Ms Arunma Oteh has started on good note by planning to link the role of the market to the larger economy, a shift of emphasis that is capable of transforming the economy into a heavy industrial base. He is of the view that if Nigeria is going to move forward in line with the paradigm shift of linking market relevance to the larger economy, then market regulators must now strategically redirect capital formation to the strategic area of heavy industrial development. He speaks further on transforming the economy through capital formation at the Exchange.

And it is the duty of the capital market to form long term capital which is used in financing capital expenditure and development in general in the economy. And that has been the main weakness in the economy because short term capital mobilisation has been a dominant factor in the activities of financial intermediation. And that has heightened the finance of trade and especially imports trade which has turned the economy into a dumping ground to the detriment of the productive sector. But one cannot blame the money market because their role is to finance short term capital requirement of trade and working capital. And that they have done excellently well.

The area of financial intermediation that has been lacking has been that of the capital market in being able to aggregate capital that is sufficient in volume and appropriate in time and cost with which to finance long term capital requirement of the economy. And so when the new Director-General of SEC came in today and said she is going to relate the function of the market to the overall development finance of the economy, I was highly impressed that now, we are going to actually have a procedure in tracking the trend of the capital market in financing the economy in such a manner that the economy henceforth will be able to create enormous wealth and also generate enormous productive employment.

The process is now going to be intensified wherein the capital market will play its role in aggregating long term capital. But secondly, what I want to solicit of the Exchange is that, yes the capital market is going to aggregate long-term capital for the economy. But we now have to differentiate between the real productive economy and service economy.

Implications of aggregating long term capital for the service system

That is why you now see exotic cars being imported into the country through trade finance, and all sorts of appliances that are manufactured outside the country. So, what the new SEC DG has to do as a matter of urgency is to redirect the financing capacity of the market away from its service-oriented financial aggregation into real sector capital aggregation finance. What I mean is that a lot of applications that we have are still in the primary market for issues. It will now be better for the regulators to promote deliberately the financing of the productive real sector in a strategic manner.

It is the underdevelopment of these three key heavy industries that have denied the country engineering infrastructure that is required to drive light industrial production in a sustainable manner and also other heavy activities. So the process of capital formation should now become even more strategic and should be geared mainly towards financing heavy industrial base.

Why govt must liberalise power, energy, and metallic industry

Take a look at the iron and steel sector; the federal government has been on iron and steel project through public finance for a very long time. So much public funds have gone down the drain without anything to show for it. So, as a first step, the FG should privatise its holdings in iron and steel industry, the metallic industry whether ferrous or non ferrous. The capitalisation will bring those companies to the capital market to be listed where proper management will now be assembled for those companies and then they will now develop public goods on ground. And then power.

If Nigeria's power industry is not deregulated and privatised, in 1000 years from now, this same problem with electricity will remain. Because even countries where the public services are corruption free and they have capacity, they don't dabble into the provision of economic goods whether from the heavy or light industrial sector. Those countries that tried it in the past have all failed with public ownership. For example, American government does not own any power generating outfit neither Japan nor most other countries.

Those are countries that are highly organised and corruption free. Then how can a country like Nigeria with a public service that is neither organised nor corruption free now manage to offer economic goods. Now, the focus of governance globally is to provide social goods. So we should learn from what is happening internationally.